Acceleration, the second derivative of displacement, is defined to be the change of velocity per unit time at a certain instance.

A common misconception is that acceleration implies a POSITIVE change of velocity, while it could also mean a NEGATIVE one.

be the velocity of an object at a time

be the velocity of the same object at a time

, is known to be constant, then

Note that velocity is a vector, so the magnitudes cannot be just subtracted in general.

If acceleration is not constant, then we can treat velocity as a function of time,

. Then, at a particular instance,

Position and its time derivatives are often used in kinematics. For example, the following four equations relate the position 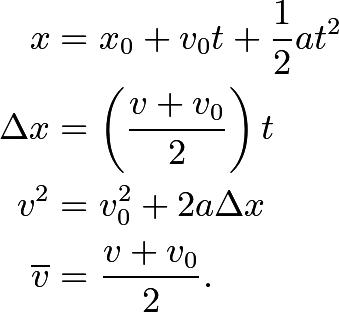 By the chain rule, one can also show

Lastly, we have the famous formula of Newton relating the force and acceleration experienced by a massive object: