Chebyshev polynomials of the first kind

The Chebyshev polynomials of the first kind are defined recursively by

Proof of equivalence of the two definitions

In the proof below,

will refer to the recursive definition. Let

Now for the inductive step, we assume that

, and we wish to prove that

From the cosine sum and difference identities we have

The sum of these equations is

By the trigonometric definition,

For now this proof only applies where the trigonometric definition is defined; that is, for

polynomial, and so is

, so the fact that

is sufficient to guarantee that the two polynomials are equal over all real numbers.

First we prove a lemma: that

. To prove this lemma, we fix

proving the lemma for

Suppose the lemma holds for

. Then multiplying the first equation by

and subtracting the second equation gives

using the original recursive definition, as long as

. Thus, the lemma holds for

To prove the claim, we now fix

proving the claim for

Suppose the claim holds for

. We may also assume

, since the smaller cases have already been proven, in order to ensure that

. Then by the lemma (with

) and the original recursive definition,

, and the values of

Connection to roots of unity

only at integer multiples of

, the roots of the polynomial

th roots of unity have arguments of

, so the roots of

are the real parts of the

th roots of unity. This lends intuition to several patterns.

are also roots of

th roots of unity are also

th roots of unity. This can also be shown algebraically as follows: Suppose

using the composition identity and the fact that

Particular cases include that

, being a root of

, being a root of

for all positive even

. All other roots of

correspond to roots of unity which fall into conjugate pairs with the same real part. One might therefore suspect that all remaining roots of

are double roots. In fact,

satisfying the same recurrence relation as

, but with the different base cases

are known as Chebyshev polynomials of the second kind.

The rational roots of

must be elements of the set

Any root other than

must be a root of

ensuring that they have integer coefficients and are monic for all

and so are always either

. Thus, by the Rational Root Theorem, any rational roots of

, so the only possible rational roots of

. Thus, the only possible rational roots of

, each an element of

By the composition identity,

is rational also. Therefore, if all rational roots of

, then any rational root of

must be a solution of

. The following five cases show that the rational roots of 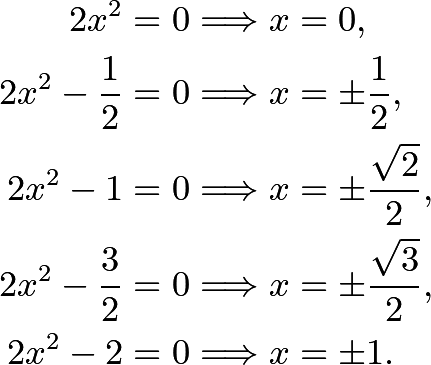 is a root of

, the five elements of

. This result is known as Niven's Theorem.

th roots of unity form a regular polygon with

in the complex plane. Therefore, such a polygon can be constructed if and only if the position of some primitive

Just as primitive roots of unity are roots of

-gon can be constructed if and only if