The Fermat point (also called the Torricelli point) of a triangle

(with no angle more than

which has the minimum total distance to three vertices (i.e., 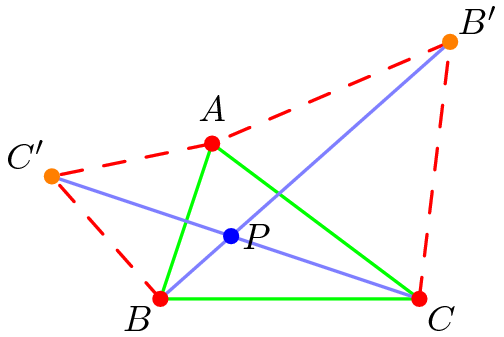 , then connect each new vertex to each opposite vertex, as these three lines will concur at first Fermat point.

We shall present a standard triangle inequality proof as well as a less-known vector proof:

First, we shall note that

must lie inside the triangle

. Otherwise, we suppose that WLOG,

is not the Fermat Point.

was acute. Consider the

, let the image of this point be

is equilateral. Now, consider the point

inside the triangle. Then,

is cyclic, so thus as

is the intersection of the circumcircle of

. Thus, we have found the Fermat Point.

Vector Proof (Due to Titu Andreescu and Oleg Mushkarov)

We will let our origin be the point

Consider the point in the plane

the unit vectors along

and adding, we see that

. Thus, the origin or point

is the desired point.

There are two main generalizations:

The problem goes as following: which point

The problem goes as following: for the polygon

Using the second solution, it is easy to see the point is the point

where the unit vectors to the vertices sum to

. For a quadrilateral, it is the intersection of the diagonals.