Functional equation for the zeta function

There are multiple proofs for the functional equation for Riemann zeta function, and this page presents a light-weighted approach which merely relies on the Fourier series for the first periodic Bernoulli polynomial that

and the Laplace transform identity that

In this article, we will use the common convention that

. As a result, we say that the original Dirichlet series definition

. However, if we were to apply Euler-Maclaurin summation on this definition, we obtain

via integration by parts:

As a result, we obtain a formula for

into the previously obtained formula, so that 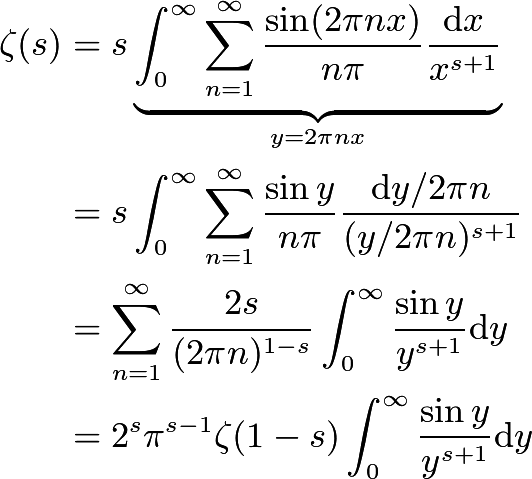 Therefore, the remaining step is to handle the integral

By Euler's formula, we have

As a result, we only need to calculate

if we want to take down the remaining integral. According to Laplace transform identities, we can see that

wherein the RHS serves to be a meromorphic continuation of the LHS integral.

Proof of the functional equation

, this identity becomes the functional equation: