In mathematics and computer science, a greedy algorithm is one that selects for the maximal immediate benefit, without regard for how this selection affects future choices.

As with all algorithms, greedy algorithms seek to maximize the overall utility of some process. They operate by making the immediately optimal choice at each sub-stage of the process, hoping that this will maximize the utility of the entire process. More formally, when we reframe the problem in terms of forming a set with a desired property, at each step a greedy algorithm will add the element into the set if and only it does not cause the set to lose the desired property.

Greedy algorithms are among the simplest types of algorithms; as such, they are among the first examples taught when demonstrating the subject. They have the advantage of being ruthlessly efficient, when correct, and they are usually among the most natural approaches to a problem. For this reason, they are often referred to as "naïve methods". In many cases, more complicated algorithms are formed by adjusting the greedy process to be correct, often through the use of clever sorting.

Many real-life scenarios are good examples of greedy algorithms. For example, consider the problem of converting an arbitrary number of cents into standard coins; in other words, consider the problem of making change. The process you almost certainly follow, without consciously considering it, is first using the largest number of quarters you can, then the largest number of dimes, then nickels, then pennies. This is an example of working greedily: at each step, we chose the maximal immediate benefit (number of coins we could give).

Some problems are not so obviously algorithmic processes. For example, the Rearrangement inequality states that if

are increasing sequences, we have

denotes any permutation of

in any order). This may have an intimidating looking statement, but it is equivalent to saying that, in the particular scenario it deals with, the greedy algorithm is the best! This is because we can view the situation algorithmically: for each of the

, we are selecting a

to pair it with - with the caveat that each

must be used exactly once. The Rearrangement inequality states that the largest

should be paired with the largest

to achieve the maximal dot product.

This idea of transforming problems into algorithmic process is a very important one. Take the following example:

The first step is to transform this into an algorithmic process, which we can do as follows: for each row, in order, shade in some (but not all) of the 10 squares.

Of course, greedy algorithms are not generally very interesting unless they're correct; in other words, they always produce the maximal overall benefit. In order to prove the correctness of a greedy algorithm, we must show that it is never beneficial to take less than the maximal benefit at any step of the process. This is most often done by focusing on two specific steps, and showing that if the benefit of one decreases and the benefit of the other increases, the overall benefit is decreased, and so taking the maximal benefit at the first step is most beneficial.

For example, let's prove the correctness of the rearrangement inequality mentioned above. Suppose we have two sequences,

. We now want to prove that

are similarly sorted; i.e. they are either both increasing or both decreasing. More formally, we wish to show that the dot product

is maximized when the sequences are similarly sorted. We first reformat the problem algorithmically: we consider the

in order, at each step choosing a

to pair it with.

We claim that the greedy algorithm produces the best result; i.e. if

is the maximal possible answer. Suppose that there exists a better algorithm. Consider the first step

in which we pair

is in a "higher position" than

is) - if this step didn't exist, we'd always be pairing

, and be done immediately. Then, at some step

- we also know that

, since we've already done the steps where

(note that it is not necessary to prove that it is worse, only that it cannot be better). In other words, we need to show that

. But this factors nicely: we want to show

. Fortunately, this is quite easy: we know that

, but we also know that

is nonpositive, proving the statement.

Of course, the immediate application of greedy algorithms does not always produce the optimal result. For example, if asked what the maximum number of elements in the set

can be chosen with sum at most 1, a particularly naive greedy algorithm will conclude the answer is two, as it will put the

term into the "greedy set", not put the

term in, put the

term in, and put none of the remaining terms in. Obviously, this is not the correct result, as the set

is much bigger and still has sum at most 1.

What went wrong here is the ordering of the elements - we certainly don't want to be considering the largest elements first! Instead we should process the elements in the order of smallest to largest, and this will indeed give us the correct set (the proof is straightforward: why would we ever take a larger element when a smaller one is available?). This concept, of sorting the elements in a convenient way prior to processing, is key to all but the most basic of greedy algorithms, and much more complicated problems can be taken down using this strategy.

Of course, greedy algorithms are not always the optimal process, even after adjusting the order of their processing. For example, there is no way to salvage a greedy algorithm to do the following classic problem: given the following triangle of numbers, at each step we will move either left or right, and add the number we reach to a running total. Our goal is to minimize the final total. 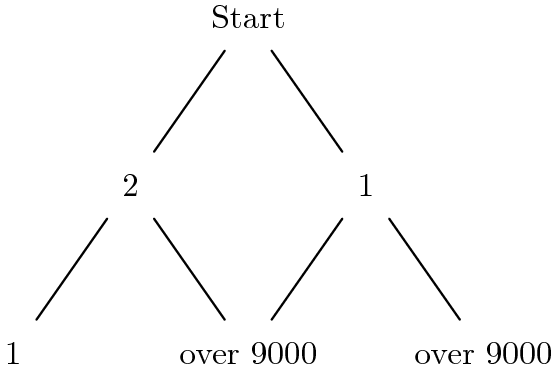 Obviously, the optimal path is to go left twice - but a greedy algorithm will begin by moving to the right! This is an example of when all paths must be considered, and taking a shortcut by using a greedy algorithm is insufficient. As an aside, it may appear that, in the general version of this problem with

layers, we have to consider all

possible paths - but there is a much more clever approach to this problem, which - as a conclusion to this article - we offer as an exercise to the reader.