During AMC testing, the AoPS Wiki is in read-only mode. No edits can be made.
AoPS Wiki
Resources Aops Wiki Jadhav Isosceles Formula

Jadhav's Isosceles Formula gives a equation to evaluate area of any isosceles triangle with know one angle and length of equal sides with trigonometric ratios. Derived by Jyotiraditya Jadhav

. then the area of the complete triangle can be found by Jadhav Isosceles Formula as below:

Trigonometry (from Greek trigōnon, "triangle" and metron, "measure") is a branch of mathematics that studies relationships between side lengths and angles of triangles. The field emerged in the Hellenistic world during the 3rd century BC from applications of geometry to astronomical studies. The Greeks focused on the calculation of chords, while mathematicians in India created the earliest-known tables of values for trigonometric ratios (also called trigonometric functions) such as sine.

About Sin and Cosine Functions:

Sin = Opposite Side / Hypotenuse

Cosine/ Cos = Adjacent Side/ Hypotenuse

Formulas for area of an Isosceles triangle till now 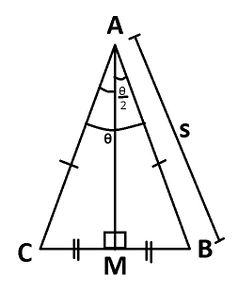 Can be used to determine the area of an Isosceles triangle