Notice that removing as many lemmings as possible at each step (i.e., using the greedy algorithm) is optimal. This can be easily proved through strong induction. Starting from 2010, which is a multiple of 15, we must first purge 1 lemming. We can then purge 4 lemmings by using groups of 5. Then, we can use groups of 3 followed by groups of 5 to reduce it to 5 less. We can repeat this step again, and we will end up at

. This process can be repeated every for every 15 lemmings, so since it takes 6 steps to clear 15 lemmings, it will take us

to remove all the lemmings.

distinct values, find the remainder when

. Also, note that for any

, there exists a corresponding

.) Therefore, we are just trying to count the number of

. To do this, we note that for any of the

, there is exactly 1 possible value of

that works. Therefore, the total number of possibilities is

We will count how many distinct arrangements (choices of target for each gunman) result in a pair shooting each other, and divide this by the total number of arrangements,

this way. However, we must account for the overcount caused by 2 pairs shooting each other simultaneously. We can choose one person who is not in the pair in 5 ways, and then of the following people, say A, B, C, and D, we make A shoot one of the others in 3 possible ways (the remaining people can shoot each other in only one other way.) Finally, the lone person can shoot whomever he so desires in 4 ways, giving

total possibilities. Our probability is then

Anderson is bored in physics class. His favorite numbers are

., and then writes down a long string consisting of those numbers juxtaposed against one another (e.g.,

...) on a sheet of paper. Since physics class is infinitely long, he writes an infinitely long decimal number. If the expected value of the number he wrote down is of the form

(the expected value of the original number only moved down a digit). Thus, in this case, his number will average

. Similarly, if he writes 7, his number will average

, and if he writes 33, his number will average

. Each of these cases happens with equal probability, so we have

Our answer is therefore

. Find the three rightmost nonzero digits of the product of the coefficients of

First, note that each of the

possible coefficients is multiplied by a different power of

because there are also

in total (this follows from the fact that every positive integer can be written uniquely as a sum of powers of 2; the coefficient of

, is obtained from multiplying together all

.) Therefore, we are trying to find the product of all of the elements of subsets of the set

(where the product of the elements of the empty set is taken to be 1). If we pair each subset

with its complement, we will have 16 pairs of subsets, each of which multiplies together to

, so the product of all of the subsets is

. Since we want the last three nonzero digits, we simply wish to find

. To make this easier, we will find it modulo 8 and modulo 125 and use the Chinese remainder theorem to find the answer.

We can now see that because

, the only number that is

is a subset of the positive integers, to output the greatest common divisor of all elements in

is empty, in which case it will output 0. Find the last three digits of

ranges over all subsets of

denote the number of subsets

. Our answer will be the sum

, we note that the non-empty sets satisfying the property that

are exactly the non-empty sets whose elements are multiples of

. Hence, the number of such sets is

between 1 and 10 inclusive.) On the other hand, the number of such sets is

, that is, the sum of the number of sets 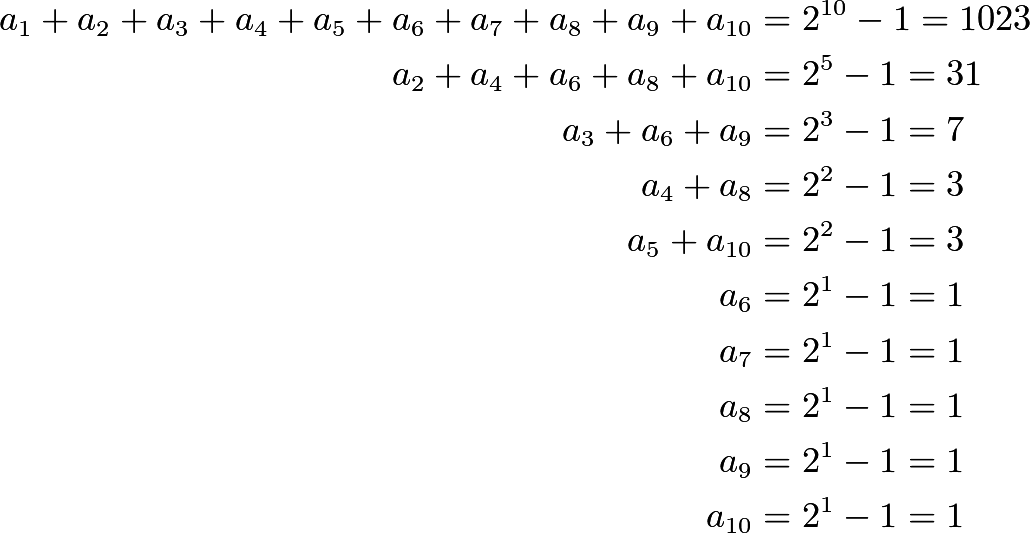 We can easily solve this system of equations to find

. Our answer is therefore

to itself such that

be the set of values that are fixed, let

be the set of values that evaluate to an element in

but are not elements of

be the set of the remaining values. Notice that all possible values of

must be nonempty. We will now use casework on the size of

, so we will multiply our result by 5 at the end. Now, let

and the only other numbers for which

are the elements of b. This also implies

. Conversely, it is easy to check any function satisfying

works, so the total number of functions in this case is

ways to choose the elements in

, and each of the

elements in C can map to any of the

elements in B. This sum evaluates to

.\\ This is very similar to case 1, except for the fact that each element in

can now correspond to one of two possible elements in

, so this adds a factor of

functions in this case.

Adding everything up, we see that our final answer is

. In addition, there is a point

. Given that the length of the radius of the circle through

that is tangent to side

be the point of tangency of the circle with

. Since the circle is tangent to

. By the extended law of sines, the circumdiameter of

(that is, the radius of our circle) is

. Therefore, the radius is

Let O be the center of the circle, and let points E and F to be the perpendiculars from O to AC and BC, respectively. First, by power of a point, we have

be the radius of the circle. We have

. By the Pythagorean theorem on triangle FOB, we have

are reals such that

, the largest possible value of

is a positive integer not divisible by the square of any prime, and

. Furthermore, we must have

. This is attained when

, which indeed occurs if we pick

is the number of positive integers less than or equal to

are distinct odd prime numbers and

is some integer, then

has at most one other prime factor, so

is of the form

We now note that

, is even, and hence does not divide

, so we wish to find the number of integers less than or equal to 2010 of the form

giving one possible value of

. Summing these values for

gives us the answer of

be a function such that

, where we are summing over the triples

. Find the last three digits of

, the number of sums that

will be in is exactly three the number of ordered pairs

we can find such that

, which in turn is just

is the number of divisors of

can be any divisor of

.) (The factor of three arises from the fact that

is the same as the set

are relatively prime integers, then

since every divisor of

can be expressed uniquely as a product of a divisor of

and as a divisor of

(upon expanding the product using the distributive property, it follows that we are summing over the set of all numbers of the form

, which is exactly the set divisors of

Find the sum of digits of

We seek to find

We shall prove by induction that

, follows from the fact that

by the binomial theorem. Now, we note that

where the last step follows from the binomial theorem.

, there are no ``carry-overs, so the sum of digits in base-100 will simply be

tells the number of ways to pick

We shall now count

another way. Consider all 8-digit (leading digits can be 0) base 101 integers; there are clearly

be the set of all

-th digit is greater than or equal to

, we can construct an 8-digit base 101 integer from this set, by having the digit

be the largest integer

. We proceed as we did before to find the sum of the digits of

. When the incircle of

is reflected across segment

, it is tangent to

. Given that the inradius of

We shall prove that in a circle

such that the incircle

(hence, it is the center of the reflection of the incircle of

is an isosceles trapezoid, so it is cyclic. Hence, by Ptolemy's theorem,

, since the reflection of

by Euler's distance formula, so

It therefore suffices to find

. By the Pythagorean theorem, since

is right, we have that 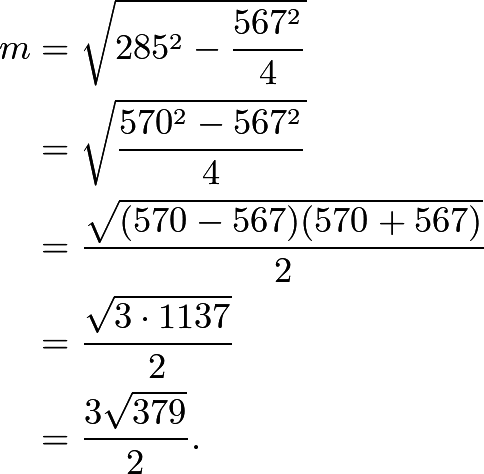 We shall prove that in another way that a circle

such that the incircle

(hence, it is the center of the reflection of the incircle of

by Euler's distance formula, so

, since the reflection of

is right, we have that

\setcounter{enumi}{13} Alex and Mitchell decide to play a game. In this game, there are 2010 pieces of candy on a table, and starting with Alex, the two take turns eating some positive integer number of pieces of candy. Since it is bad manners to eat the last candy, whoever eats the last candy loses. The two decide that the amount of candy a person can pick will be a set equal to the positive divisors of a number less than 2010 that each person picks (individually) from the beginning. For example, if Alex picks 19 and Mitchell picks 20, then on each turn, Alex must eat either 1 or 19 pieces, and Mitchell must eat 1, 2, 4, 5, 10, or 20 pieces. Mitchell knows Alex well enough to determine with certainty that Alex will either be immature and pick 69, or be clich\'ed and pick 42. How many integers can Mitchell pick to guarantee that he will not \emph{lose the game}? (George Xiniiiiiig)

Note that Mitchell has 1, 2, 3, and 4 among his divisors and that no matter which number Alex chooses, Alex will not have a multiple of 4. Therefore, after Alex's first turn, let Mitchell choose one of his divisors so that the remaining number of pieces of candy on the table is congruent to 1 modulo 4. As Alex cannot decrease the amount of candy by a multiple of 4, he cannot force Mitchell to lose (as Mitchell can only be forced to lose if he is left with 1 piece of candy on the table.) Because Mitchell cannot be forced to lose, Mitchell has a winning strategy.

With this information, our answer simply becomes the number of multiples of 12 below 2010, which is

between 0 and 982 inclusive such that

. Note that the following:

is equal to the set

is the set of all complex numbers of the form

are integers between 1 and 491 inclusive, which is the same as the set of all complex numbers of the form

are integers between 1 and 491 inclusive. The latter set is clearly comprised of exactly the conjugates of the elements of 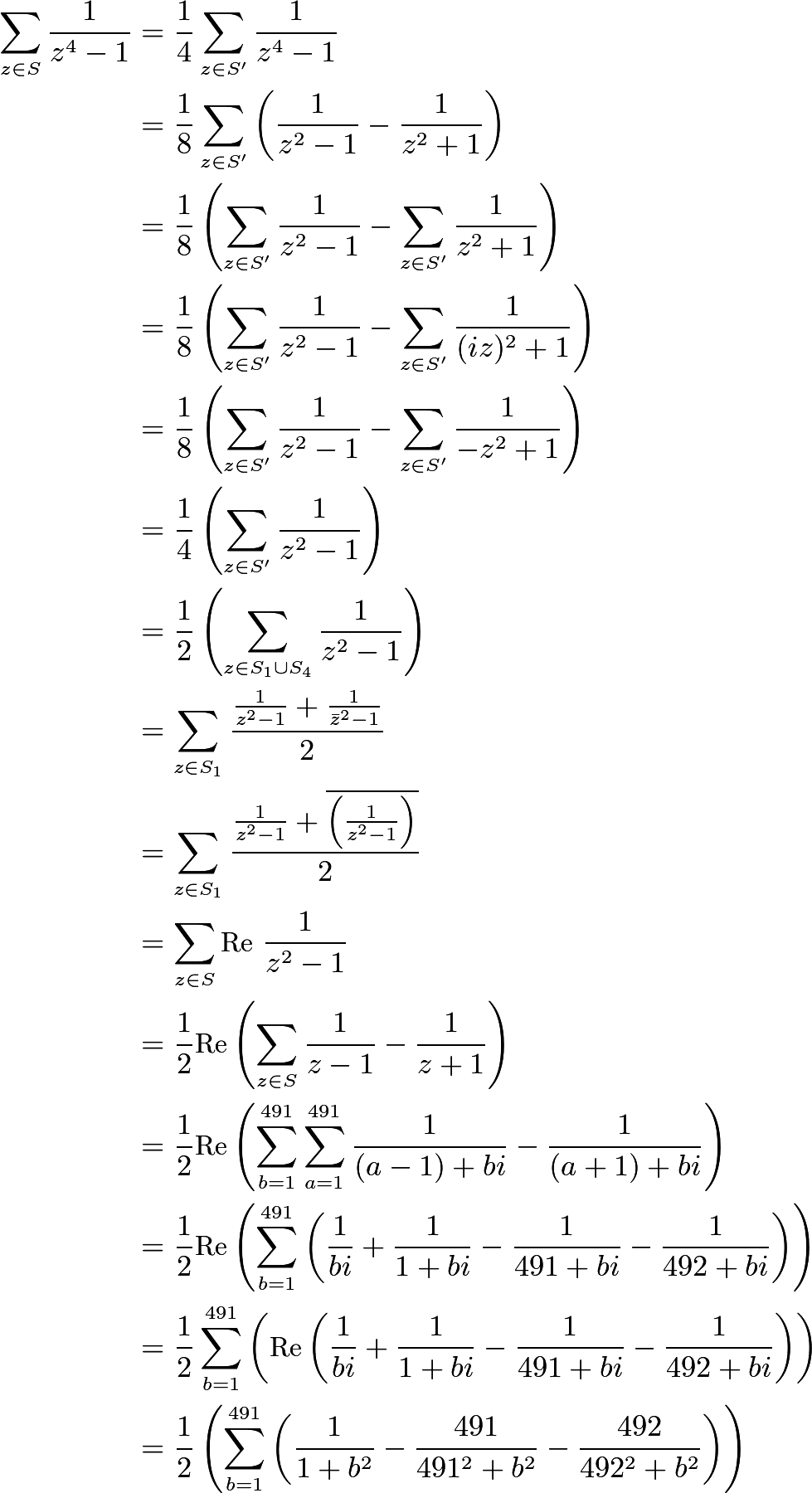 We seek the integer

, that is, we seek the value of

are never divisible by

, so the denominators of the above sum is never divisible by

. (Alternatively, upon noticing that

, the problem statement implies that none of the denominators are divisible by

.) As the above sum that we have arrived at is real, and none of its denominators are divisible of 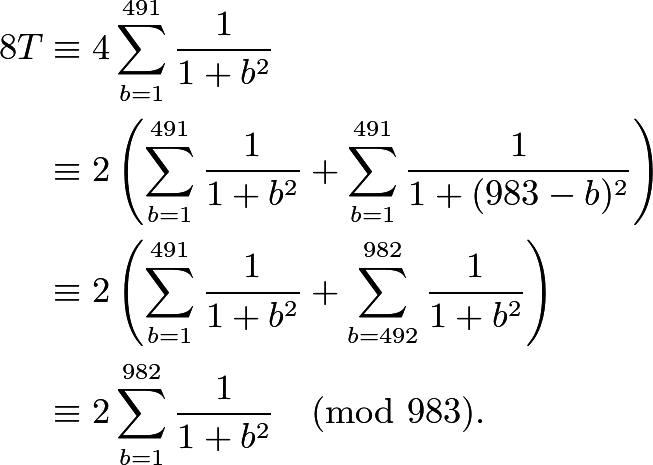 is a permutation of 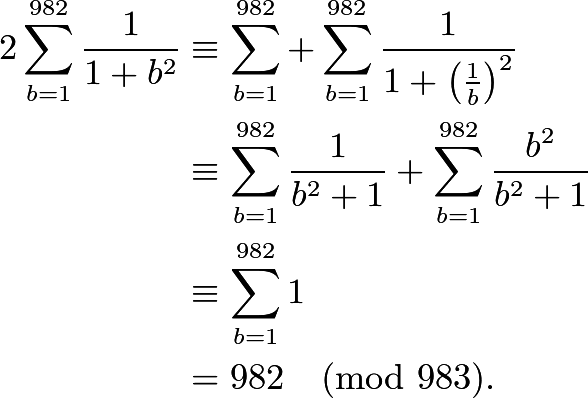 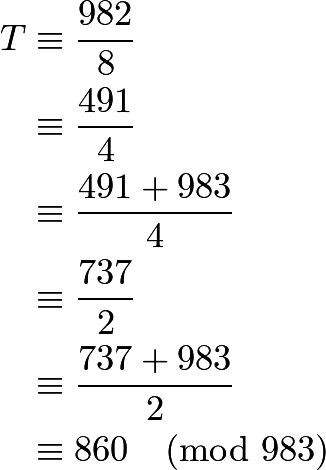 giving us an answer of