During AMC testing, the AoPS Wiki is in read-only mode. No edits can be made.
AoPS Wiki
Resources Aops Wiki Mock USAMO by probability1.01 dropped problems

be a fixed positive integer, and let

be distinct positive integers. We define

. Prove that there are no distinct positive integers

is a geometric sequence.

Reason: The result is somewhat interesting, but no clever or surprising steps are used to solve the problem. Solution

on the opposite side of

Reason: The whole incircle business seemed rather artificial. Besides, it wasn't that difficult. 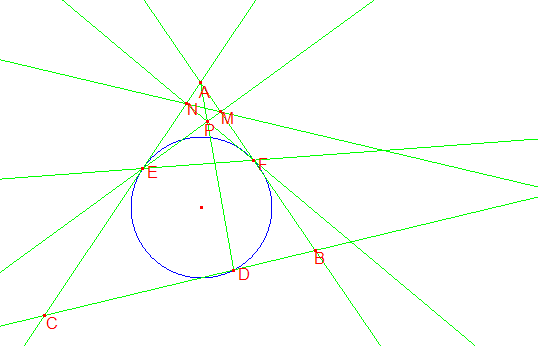 be an interior point. Suppose the circumcircles of

Reason: This is really easy with inversion. It's also quite hard without ideas from inversion (try to find a way!). Too bad, it was a pretty nice problem otherwise.

be a cyclic quadrilateral. Prove that

Reason: This problem was interesting but too simple.

. Prove that all numbers in the sequence are integers.

Reason: This was actually a pretty good problem, but it was vying for the number 1 or number 4 spot with lots of other problems. Plus, bubala made this one.

In the game of Laser Gun, two players move along the

-axis, and a mirror lies along the segment connecting

. A number of opaque computer-controlled tiles of width 1 unit can slide back and forth along the mirror. Each player tries to shoot a laser at himself by reﬂecting it off of the mirror, thus scoring a point. The computer moves its opaque tiles to try to block the shots. If the players each move at twice the speed of each tile, then what is the minimum number of tiles needed to ensure that neither player can ever score a point?

Reason: The wording is way too confusing, and the whole shooting yourself thing didn’t do Laser Gun justice. However, if you do actually understand this problem, it's rather interesting.