Newton's method uses the derivative of a differentiable function to approximate its real or complex roots. For a function

, the approximations are defined recursively by

To begin the recursion, an initial guess

must be chosen. Often the choice of

determines which of several possible roots is found, and in some cases the initial guess can cause the recursion to cycle or diverge instead of converging to a root.

At each step of the recursion, we have

and seek a root of

. Since all nonconstant linear functions have exactly one root, as long as

we can construct a tangent-line approximation to

We seek the value

such that the above expression equals

Therefore, the desired value of

Problem: Find the values of the roots of

Solution: We could use the quadratic formula to find that the roots are

, but this approach does not immediately yield a decimal value.

To form a guess, we note that

is slightly larger than

, so a suitable guess for the greater root is

by the power rule for derivatives. Therefore, the recursive formula is

, we apply this formula repeatedly: 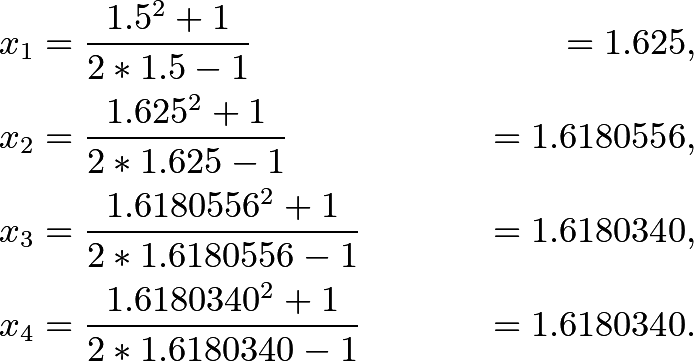 as calculated, the ratio

must be very close to

is not too large,

must be quite close to

is a very good estimate of the greater root.

The sum of the roots is

by Vieta's formulas, so the lesser root is simply

Although powerful, Newton's method is delicate and can be very sensitive to the initial guess and type of function, even when the function is differentiable everywhere.

Suppose in the above example of finding a root of

, we had started with

. In the process of calculating

, then, we would have to divide by

Suppose we try to estimate the greater root as before, but start with

yields the following sequence of estimates: 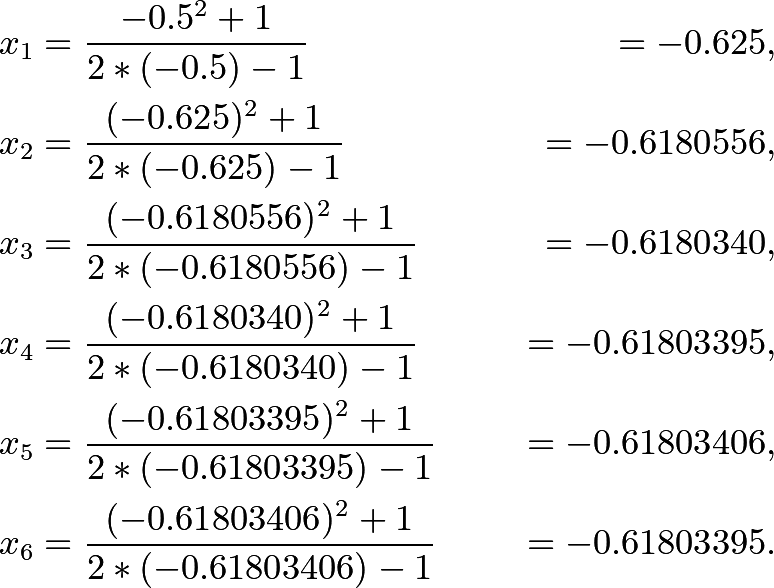 Periodic behavior without finding a root

When finding roots of

as above, the estimates eventually stabilize into a predictable pattern: in the

, so every subsequent estimate will equal

, so the subsequent estimates will oscillate, with every even estimate equal to

and every odd estimate equal to

. These behaviors are due to the limited precision of the calculations; with indefinite precision, the estimates would continue to approach the root without becoming periodic.

However, for some functions, Newton's method can cycle without coming close to a root.

is always positive, so it has no roots. Since

, so the sequence of estimates produced by Newton's method becomes

, diverging in the negative direction.

The applications of Newton's Method actually apply to Hensel's Lemma, specifically in the

. In particular, take some polynomial

. Our goal is to approximate some

adics, we can't just ``lift" arbitrarily. We actually need to approximate such a solution in the next

power level, and then refine it iteratively.

Here's what that looks like realistically. WLOG we assume that

. By assumption we know that

This is exactly the statement of the Newtonian Algorithm! Our root is approximated, so we found some

. But this isn't the whole story.

then there exists an

. By definition we see that

This proves (2). Notice, however, that in the Taylor expansion of

. Taking the Taylor expansion of

This sets up the entire motivation behind Hensel's Lemma in a more formal way. In addition, the proof of the lemma is just an extension of what we previously noted, which actually makes all of our previous work worth it in the long run.

, then there exists a unique root

Proof: We first prove the existence of

be given. We can construct

We can do this for

such that we have a sequence

. Now we prove that

is unique. For the sake of contradiction, suppose that there are two roots

Since it was given that

so we have at the very least

were assumed to be roots, we factor to get