Actually, I prefer Euler line. (I think it's referenced as such in most published materials anyhow, but I can't support my claim.) I also think that it in general, it is usual to name geometric objects after their discoverers without using possessives (e.g., the Simson line, Brocard point, Fermat point). I think that the reason for this might be that "The Euler line of triangle

" sounds much less silly than "The Euler's line of triangle

". But in any event, if you rename an article, you should rename its associated discussion section as well. —Boy Soprano II 18:50, 4 November 2006 (EST)

Okay i've made the image but im too lazy to type up a description to put on the wiki page :-P. Could some one add it? its 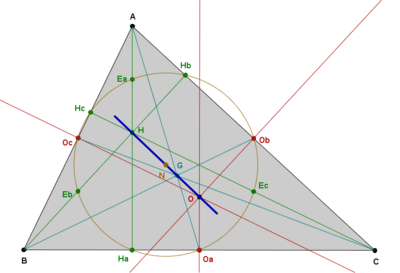