During AMC testing, the AoPS Wiki is in read-only mode. No edits can be made.
AoPS Wiki
Resources Aops Wiki User talk:Azjps/sandbox/gov school

Most of the materials to be sent to Mars will spend time on a parking orbit around the Earth, which is an orbit about the Earth which we have set to

. This gives a greater number of opportunities for launch. The spacecraft itself will be kept in orbit about Mars, while a lander and return craft will allow transportation from the Martian surface to the spacecraft.

A base constructed in parking orbit will be sent to Mars first. This will precede the actual launch by approximately two years, and will be timed to open and self-develop at the correct time. The base will enter the atmosphere of Mars and will use powerful retro-rocket firings to dramatically decrease the impact of collision.

These launch windows will occur respectively at February 2031 and March 2033 (Citation: Wikipedia). Mars and Earth line up with respect to each other every

years (this period is known as the synodic period). For example, launch windows occured August 2005 and October 2007, which we can write in decimal format as

. Since the period is

years, then other launch windows can be written in the form

, which will be our launch dates for the base and the spacecraft, respectively.

The journey to Mars will take approximately six months; details are located under Trajectory and calculations. The astronauts will stay on Mars for a period of a year before returning.

The elliptical orbits of Mars and the Earth look as follows: 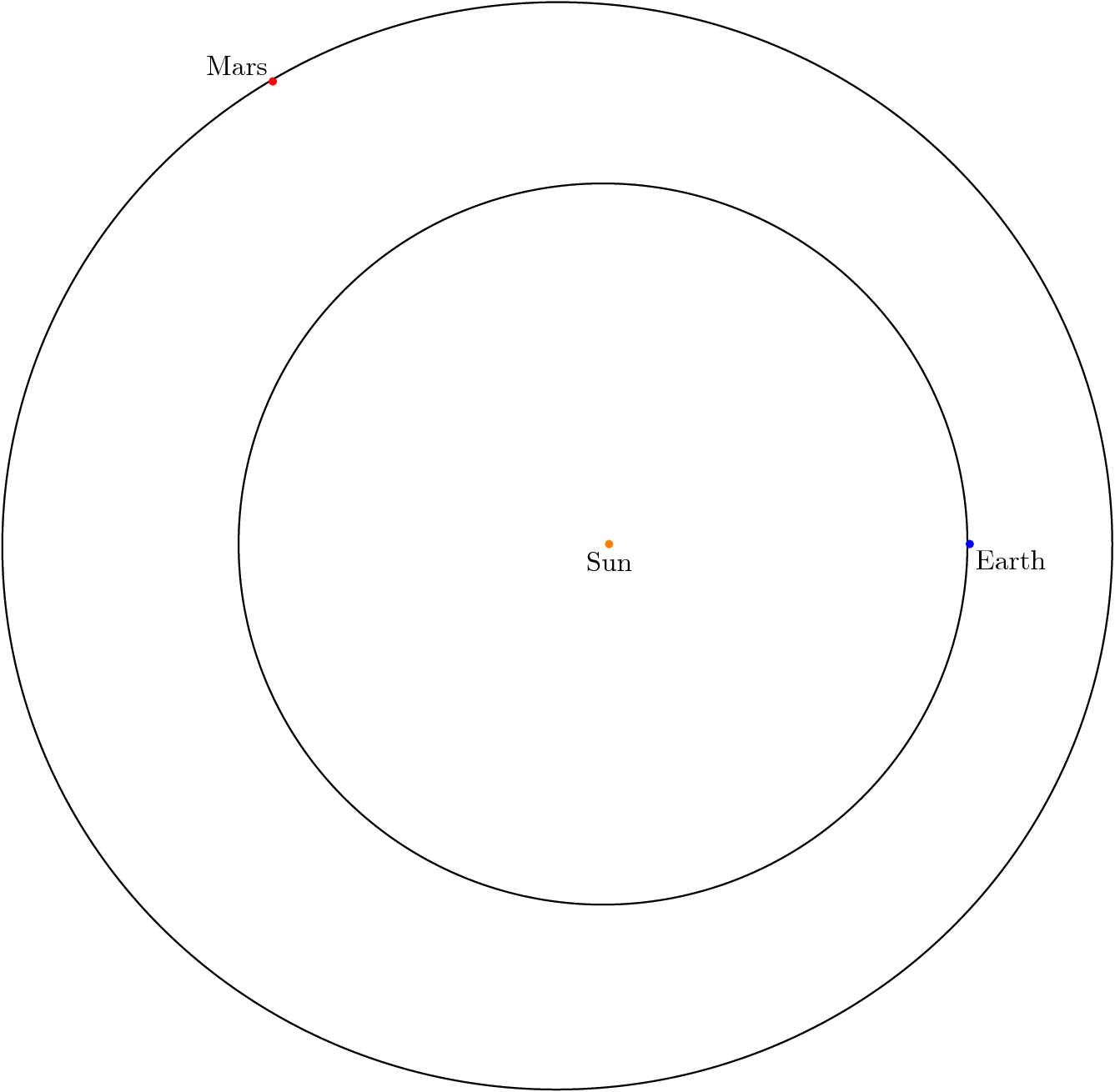 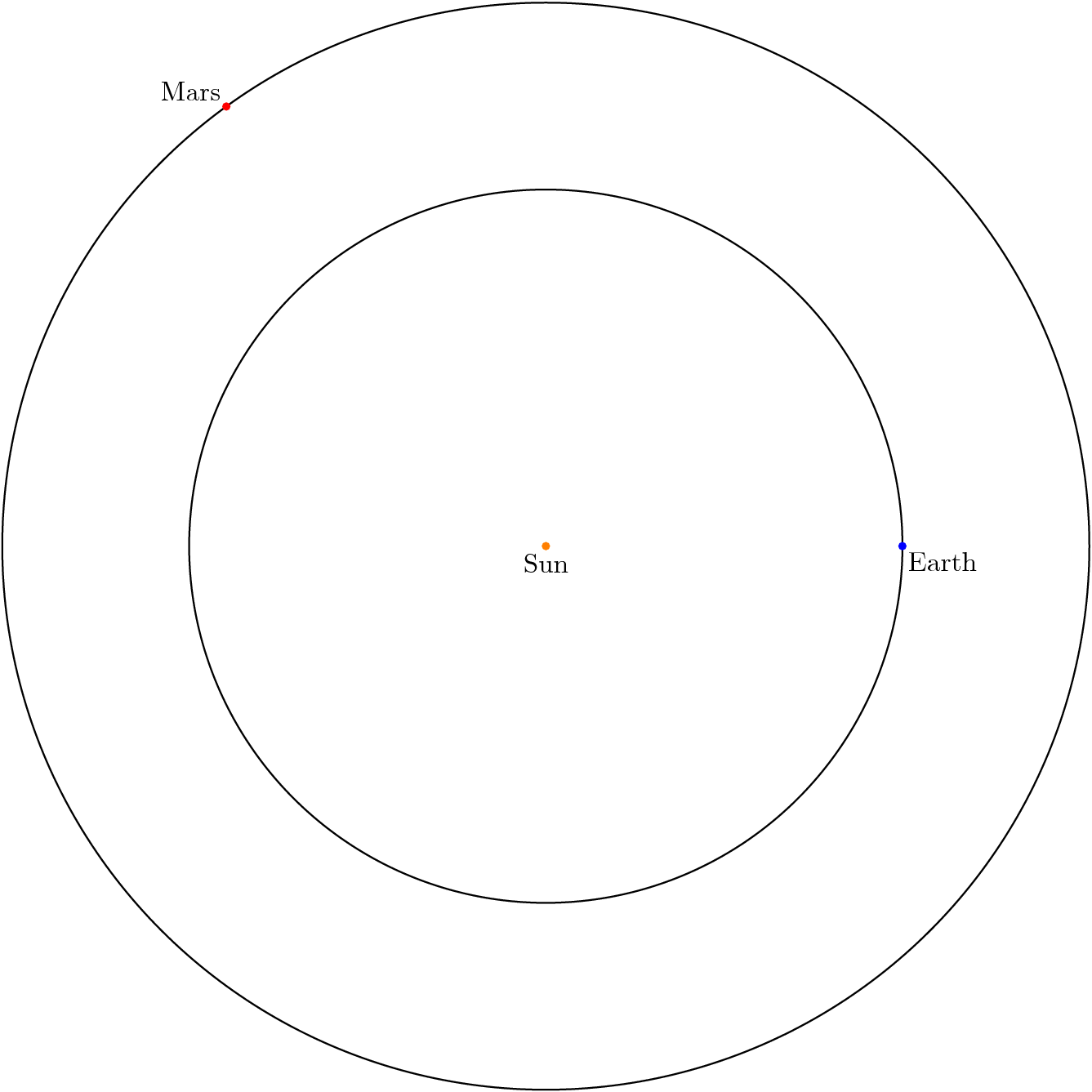 (Figure 1(a,b). The first diagram shows the elliptical orbits; the orbits will be approximated as circles for calculational ease. The scale ratio here is approximately 0.75 inches : 1AU.)

However, for the sake of simplicity of calculations, we let the orbits be (1) coplanar (2) concentric (3) circular, with the Sun at the center. We describe the error caused by these assumptions under the Calculational Errors section. 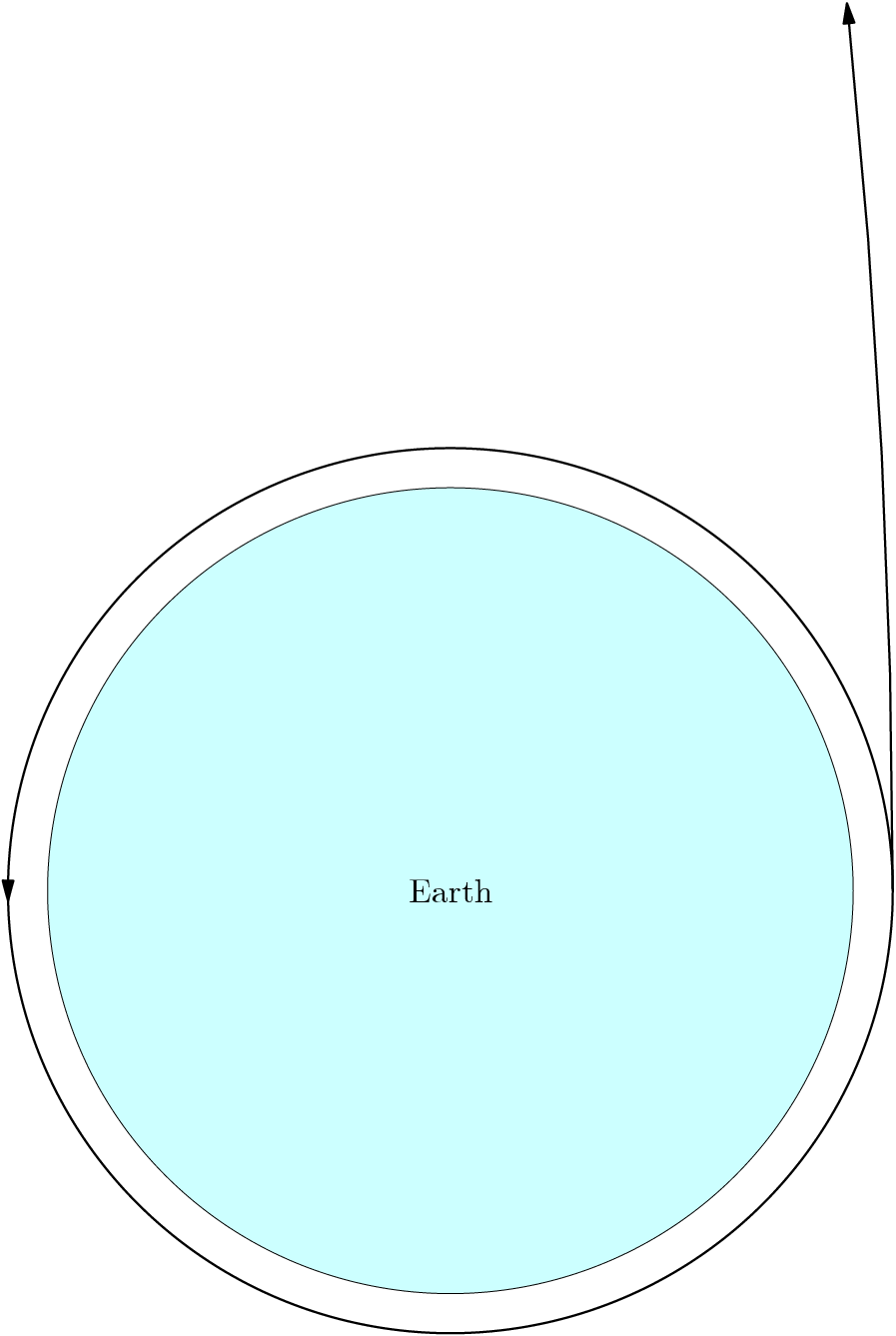 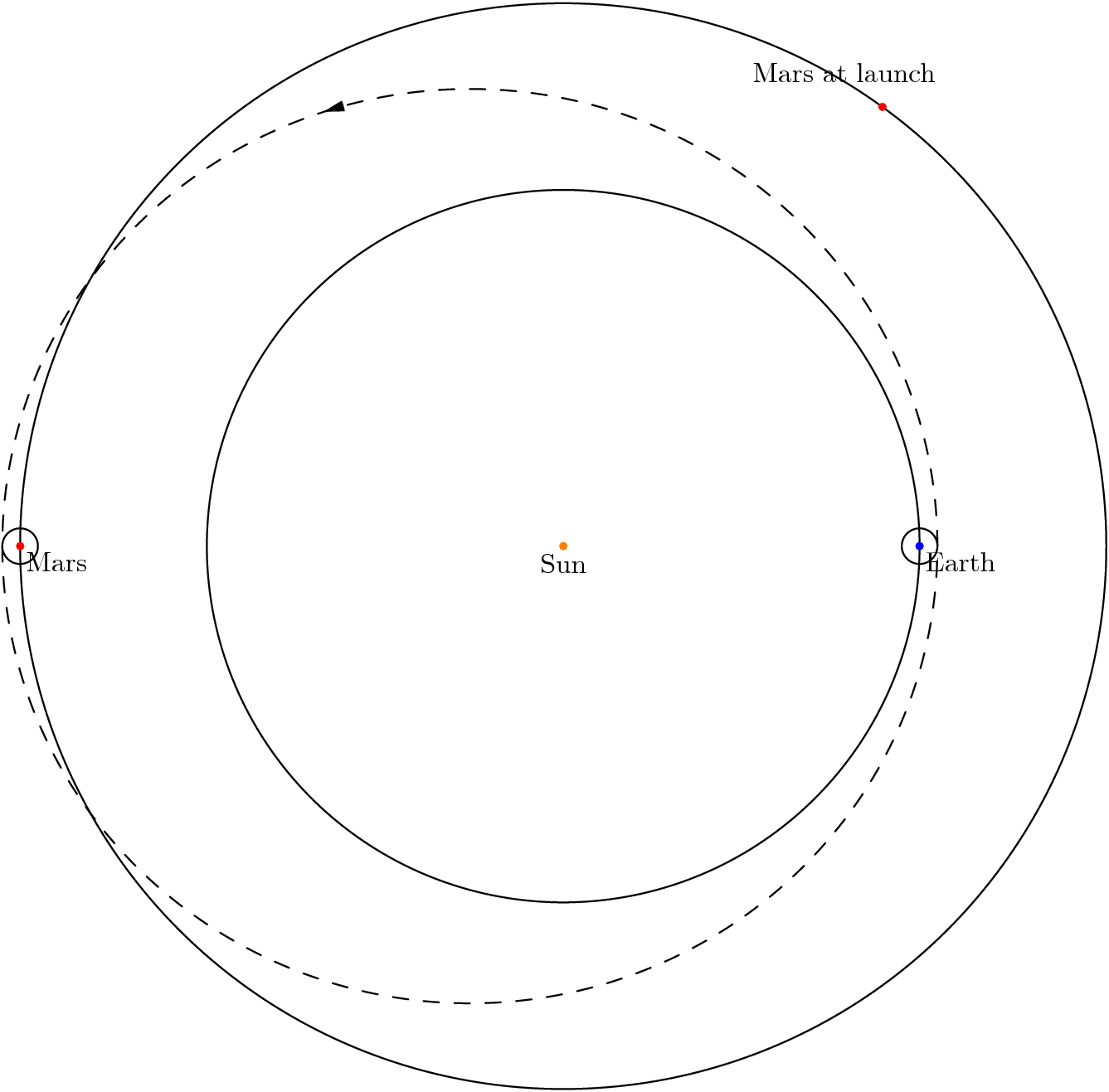 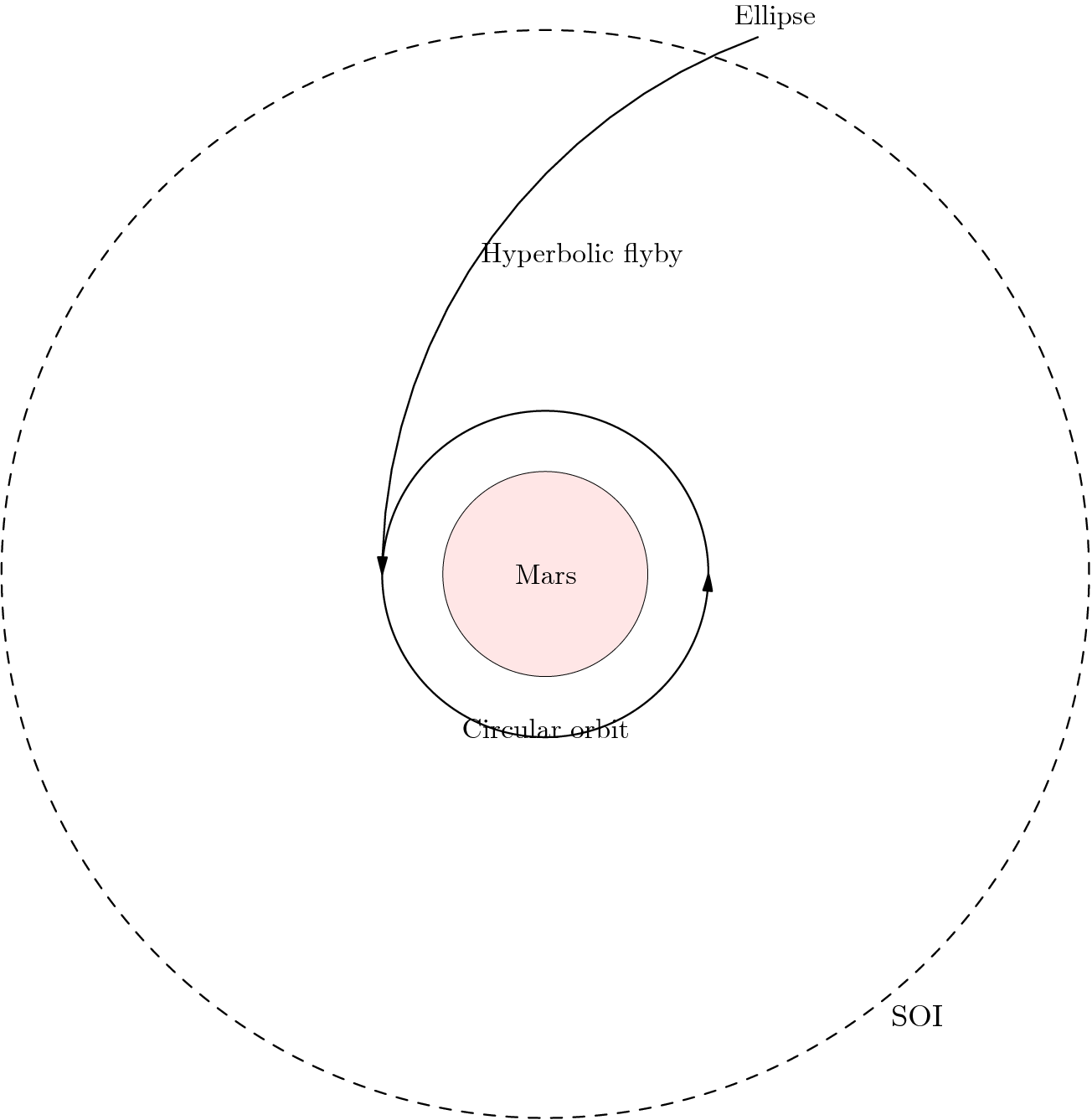 We consider an orbit of a satellite at a height of

(arbitrarily picked to be close to the orbits of other satellites) about the surface of the Earth. In order for an object to reach this altitude (in our case, we are shuttling the necessary parts/supplies), the conservation of energy from kinetic to potential applies:

is the gravitational parameter of an astronomical body. It follows that an initial shuttle thrusting of

For a satellite to maintain this altitude, the force of gravity upon the satellite must provide sufficient centripetal force for revolution about the Earth, or $\frac{V^2}{r} = \frac{\mu}{r^2} \Longrightarrow V_{orbit} = \sqrt{\frac{\mu_E}{r_E+h}} = 7726\ \frac ms \tag{(1)}$ (Error compiling LaTeX. ! Package amsmath Error: \tag not allowed here.). The escape velocity of the spacecraft from the orbit in space at a distance of

The next step involves the elliptical transfer (known as the Hohmann transfer) from the orbit of Earth to that of Mars, which relies upon the gravitation provided by the Sun. Thus the sun is at one of the foci of the ellipse. We can now calculate some general properties of the ellipse (shown in Figure y(b); variables are explained in Appendix A):

The specific angular momentum of the orbit is

To enter our desired elliptical orbit, we have two options:

The latter option requires less energy, and is known as the Oberth hyperbola. Indeed,

To achieve a speed of

, we only need to fire a thrust in addition to the

. This firing will be sufficient to carry the spacecraft from the Earth to Mars.

Another point to take into account is the angle with which the satellite should be launched with respect to the tangential velocity of the Earth about the Sun. The sphere of influence of a certain body is defined as the region in which that body has greater gravitational influence than any other bodies. Using

, the ratio of two gravitational forces upon a single object is

. For the sake of convention, we define the sphere of influence of a mass

to be the region at which

. For Earth against the Sun, this value is

the radius of the Earth. At the end of the Oberth hyperbola, which is at the edge of this sphere of influence, our satellite should be aligned with the direction of the Earth about the Sun (

and the approximation that 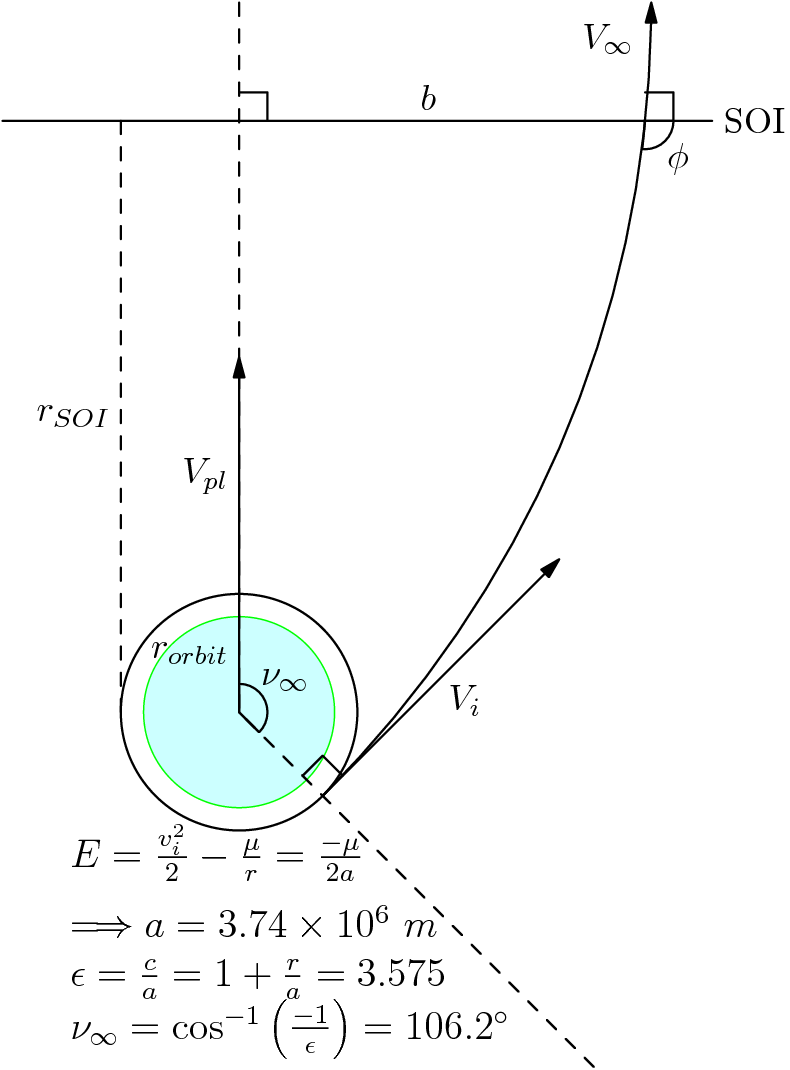 (Figure 3. Asymptotic overview showing the hyperbolic path of the spacecraft parallel to the Earth's orbit.)

Mars and Earth are lined up at February 2031, March 2033 (see Timeline of launch). Thus, the spacecraft must be launched 8.5 months ahead, respectively at May 2030, July 2032. At this point, the spacecraft will enter the sphere of influence (SOI) of Mars. Since Mars is traveling at

about the Sun, the relative velocity of the spacecraft at the periapsis for the Hohmann ellipse is

To determine whether the spacecraft will fly about Mars and get captured by its gravity or if it will crash into Mars, we define the impact parameter, which is a condition that determines whether or not a flying object will collide with another due to gravity. Our goal is to have the spacecraft revolve in a circular orbit, where the spacecraft hovers over the same spot above Mars at all times, which would allow quick communication. This Martianosynchronous orbital period is given by Kepler's Laws to be

. Using conservation of energy, the spacecraft reaches a speed of

is the speed of the spacecraft at the periapsis (closest point) on the hyperbolic flyby of Mars.

Since our goal is to achieve a permanent circular orbit of the spacecraft about Mars, we require that the gravitation force by Mars provides a sufficient centripetal force, or

. Thus, as the spacecraft makes the flyby, it must decrease its speed by

In conclusion, the velocity budget for this journey is

Finally, we would like to launch our lander into the Martian atmosphere. We can approximate the speed of the lander using the conservation of energy:

. The lander uses a system of backwards thrusts to dramatically reduce its speed upon entering the atmosphere, and then uses a parachute to reach a low terminal velocity. A system of inflatable balloons will soften the impact of the lander on the Martian surface.

The return craft, which goes with the base on the first trip, will be used to return the crew back to the orbiting spacecraft. The return journey will follow a similar elliptical orbit, except the order is now backwards: the journey starts with leaving from Mars, and reaches the Earth. Specifically, the same orbital speeds about Mars and the Earth and the same elliptical orbit applies, so the journey will be of approximately the same duration and have a similar shape.

Outside of natural error introduced by measurement problems, certain errors are introduced with several of the assumptions used to perform these calculations. The plane of Mars with respect to that of Earth is tilted at

, and Mars and Earth have eccentricities respectively of

. Earth's orbit, at extremes, differs only about

from its average radius (1 AU), while the Martian orbit differs by about

. The problems we discussed above at all times used a "patched-conic" solution, during which we switch between different conic section orbits instantaneously (such as the sharp bound at the sphere of influence). They also assume that the masses are point sources, and that there are at most 2 bodies affecting the spacecraft's trajectory at any point. Certain design specifications, such as that the acceleration of a rocket occurs instantaneously, can be assumed because of the relative distances. In all of these cases, the percentage differences are fairly small, yet all extremely significant.

Our rotating room is in the form of annulus, with an inner radius of 64 feet and an outer radius of 74 feet. Using the equation from the previous section,

. Approximating the human as six-feet tall, the centripetal force at the head is

, a difference of 8% between the forces on the head and feet of the astronaut, which is tolerable.

is the universal gravitation constant, Centripetal: 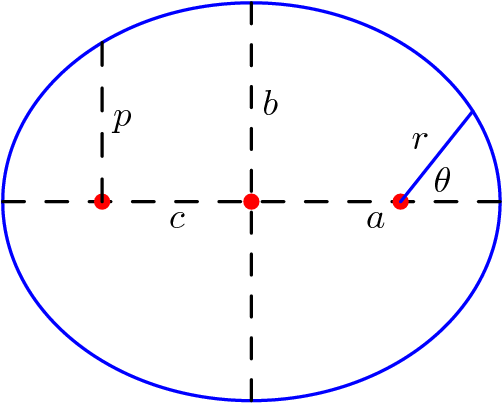 (Figure 4: An example of an ellipse with

The shape of a conic section is determined by a certain dimension and an eccentricity,

, and the distance from the center of an ellipse to a focus is

. The equation of an ellipse can be written in the form

parameterize the points of the ellipse in terms of the distance from one focus. The quantity

is the semi-latus rectum of the ellipse. Some equations that come from physics regarding an object in an elliptical orbit include:

is the specific angular momentum,

is the energy. A circle is a specific ellipse that has an

, but similar equations for ellipses apply to a hyperbola.