During AMC testing, the AoPS Wiki is in read-only mode. No edits can be made.
AoPS Wiki
Resources Aops Wiki Difference between revisions of "2006 AIME II Problems/Problem 8" 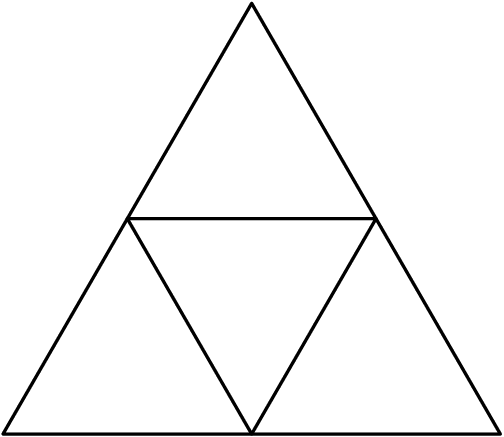 There are 6 possible colors for the center triangle.

Thus, in total we have

We apply burnsides lemma and consider 3 rotations of 120 degrees, 240 degrees, and 0 degrees. We also consider three reflections from the three lines of symmetry in the triangle. Thus, we have to divide by

for our final count.

Case 1: 0 degree rotation. This is known as the identity rotation, and there are

choices because we don't have any restrictions.

Case 2: 120 degree rotation. Note that the three "outer" sides of the triangle have to be the same during this, and the middle one can be anything. We have

Case 4: symmetry about lines. We multiply by 3 for these because the amount of colorings fixed under symmetry are the exact same each time. Two triangles do not change under this, and they must be the same. The other two triangles (1 middle and 1 outer) can be anything because they stay the same during the reflection. We have

ways for one symmetry. There are 3 symmetries, so there are

Now, we add our cases up:

distinguishable ways to color the triangle.