During AMC testing, the AoPS Wiki is in read-only mode. No edits can be made.
AoPS Wiki
Resources Aops Wiki 2013 UNCO Math Contest II Problems

Twenty-first Annual UNC Math Contest Final Round January 19, 2013. Three hours; no electronic devices. Justify your answers. Clear and concise presentations will earn more points. We hope you enjoy thinking about these problems, but you are not expected to solve them all. The positive integers are

In the diagram, the two circles are tangent to the two parallel lines. The distance between the centers of the circles is 8, and both circles have radius 3. What is the area of the shaded region between the circles?

and also equal to

(a) Find the smallest positive integer multiple of

that is a perfect square.

(b) Find the smallest positive integer multiple of

that is a perfect cube.

that is both a perfect square and a perfect cube. 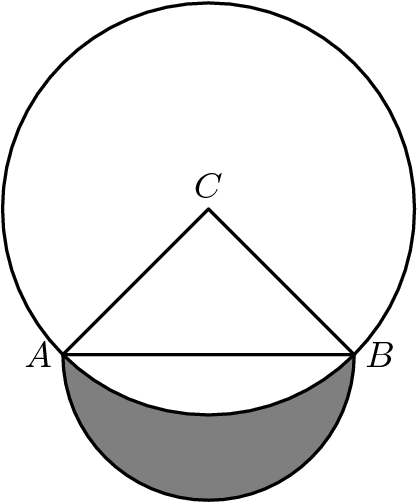 is the center of a large circle that passes through both

lies on the small circle whose diameter is

. The area of the small circle is

. Find the area of the shaded

, the region inside the small circle and outside the large circle.

If the sum of distinct positive integers is

, find the largest possible value of their product. Give both a set of positive integers and their product. Remember to consider only sums of distinct numbers, and not

, etc., which have repeated terms. You need not justify your answer on this question.

There is at least one Friday the Thirteenth in every year.

(a) What is the latest possible month in which the first Friday the Thirteenth can occur?

(b) In a year in which the first Friday the Thirteenth occurs in its latest month, what day of the week is January

The table below shows the number of days in each month. February has

days in leap years and

Suzie and her mom dry half the dishes together; then mom rests, while Suzie and her dad dry the other half. Drying the dishes this way takes twice as long as when all three work together. If Suzie’s mom takes

seconds per dish and her dad takes

seconds per dish, how long does Suzie take per dish?

has period three and is abbreviated by placing a bar over the shortest repeating block.

(a) If all digits

are allowed, how many distinct periodic decimals

have period exactly six? Do not include patterns like

that have shorter periods.

(b) If only digits

are allowed, how many distinct periodic decimals

The standard abbreviation for the non-terminating repeating decimal

, a string of five digits. How many distinct non-terminating repeating decimals

can also be abbreviated as

has two parts: a repeating tail

and a non-repeating head

. If the string has no head, the decimal is periodic, which is acceptable. There must be a tail string

, which by convention is NOT permitted to be

, since that corresponds to a terminating decimal. The examples

are all standard abbreviations for nonterminating repeating decimals.

FrankenCoder’s internal wiring for scrambling letters is diagrammed at left, depicted as a collection of cycles. The arrows show how each of the eleven letters moves in a single scramble: letter

tiles. If the pattern is continued, how many tiles will Stage