During AMC testing, the AoPS Wiki is in read-only mode. No edits can be made.
AoPS Wiki
Resources Aops Wiki Difference between revisions of "2016 AIME II Problems"

Initially Alex, Betty, and Charlie had a total of

peanuts. Charlie had the most peanuts, and Alex had the least. The three numbers of peanuts that each person had formed a geometric progression. Alex eats

of his peanuts, Betty eats

of her peanuts, and Charlie eats

of his peanuts. Now the three numbers of peanuts each person has forms an arithmetic progression. Find the number of peanuts Alex had initially.

chance of rain on Saturday and a

be real numbers satisfying the system

rectangular box is built from

unit cubes. Each unit cube is colored red, green, or yellow. Each of the

green cubes, and some yellow cubes. Each of the

yellow cubes, and some red cubes. Find the smallest possible volume of the box.

have a common center at

is a smaller positive integer. Square

and each vertex of

lies on a side of

. Find the difference between the largest and smallest positive integer values for the area of

Find the number of sets

is equal to the product of

The sequences of positive integers

. There is an integer

-nice if there exists a positive integer

positive divisors. Find the number of positive integers less than

The figure below shows a ring made of six small sections which you are to paint on a wall. You have four paint colors available and you will paint each of the six sections a solid color. Find the number of ways you can choose to paint the sections if no two adjacent sections can be painted with the same color. 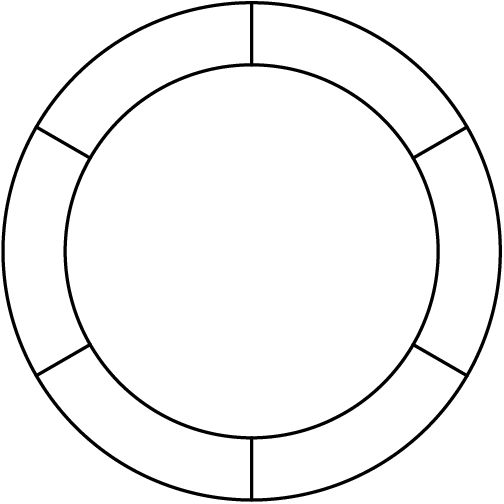 Beatrix is going to place six rooks on a

chessboard where both the rows and columns are labeled

; the rooks are placed so that no two rooks are in the same row or the same column. The

of a square is the sum of its row number and column number. The

of an arrangement of rooks is the least value of any occupied square.The average score over all valid configurations is

lie outside the plane of

and are on opposite sides of the plane. Furthermore,

, and the planes of

dihedral angle (the angle between the two planes). There is a point

whose distance from each of