During AMC testing, the AoPS Wiki is in read-only mode. No edits can be made.
AoPS Wiki
Resources Aops Wiki 2021 AIME I Problems

Zou and Chou are practicing their 100-meter sprints by running

races against each other. Zou wins the first race, and after that, the probability that one of them wins a race is

if they won the previous race but only

if they lost the previous race. The probability that Zou will win exactly

is a rectangle with side lengths

is a rectangle with side lengths

as shown. The area of the shaded region common to the interiors of both rectangles is 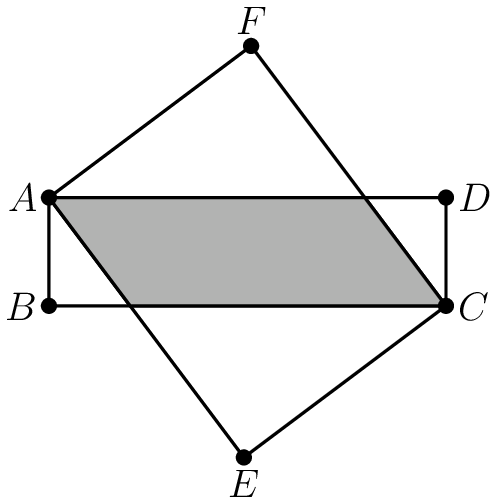 Find the number of ways

Call a three-term strictly increasing arithmetic sequence of integers special if the sum of the squares of the three terms equals the product of the middle term and the square of the common difference. Find the sum of the third terms of all special sequences.

are edges of a cube and

is a diagonal through the center of the cube. Point

Find the number of pairs

of positive integers with

such that there exists a real number

Find the number of integers

such that the equation

of positive rational numbers defined by

Determine the sum of all positive integers

such that the rational number

be a dodecagon (12-gon). Three frogs initially sit at

denotes the sum of the positive integer divisors of