Two parallel chords in a circle have lengths

, and the distance between them is

. The chord parallel to these chords and midway between them is of length

represent the chords with length

respectively (as shown below). Connecting the endpoints of the chords with the center, we have several right triangles. However, we do not know whether the two chords are on the same side or different sides of the center of the circle. 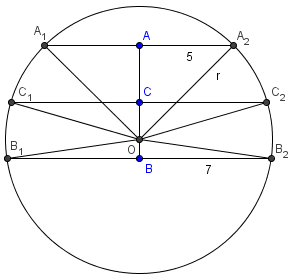 depending whether or not

are on the same side of the center of the circle:

Only the negative works here (thus the two chords are on opposite sides of the center), and solving we get

. The leg formed in the right triangle with the third chord is

, and by the Pythagorean Theorem again

be the chord of length

be the chord of length

intersecting the circle at

. By the Power of a Point Theorem,

are on the circle, the diameter

by Pythagorean Theorem, so the radius is

be the center of the circle,

is a right angle. Then

, again by Pythagorean Theorem. The chord midway between

is a distance of 3 away from each, so 2 away from

. Using the Pythagorean Theorem one more time, half the length of the chord is equal to