Which of the following statements is false?

The number halfway between

Find the sum of all prime numbers between

greater than a multiple of

less than a multiple of

The marked price of a book was

What is the largest number of acute angles that a convex hexagon can have?

Before Ashley started a three-hour drive, her car's odometer reading was 29792, a palindrome. (A palindrome is a number that reads the same way from left to right as it does from right to left). At her destination, the odometer reading was another palindrome. If Ashley never exceeded the speed limit of 75 miles per hour, which of the following was her greatest possible average speed?

A sealed envelope contains a card with a single digit on it. Three of the following statements are true, and the other is false.

Which one of the following must necessarily be correct?

to label all the lockers, how many lockers are there at the school?

, each with leading coefficient

Define a sequence of real numbers

be a real number such that

be a polynomial such that when

How many zeros does

have on the interval

satisfying in the following conditions:

. Among all such triangles, the smallest possible value of 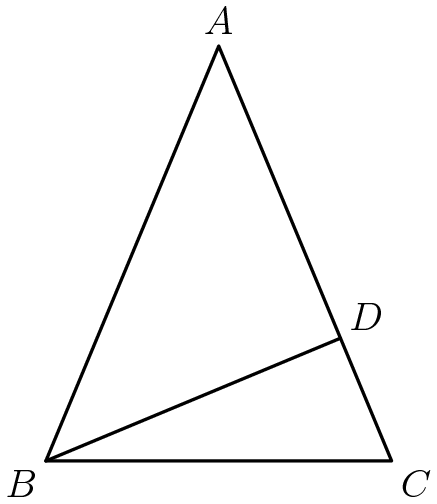 is the arithmetic mean of the first

A circle is circumscribed about a triangle with sides

thus dividing the interior of the circle into four regions. Let

be the areas of the non-triangular regions, with

be the largest. Then

The area of the hexagon is

Six points on a circle are given. Four of the chords joining pairs of the six points are selected at random. What is the probability that the four chords form a convex quadrilateral?

There are unique integers

Three non-overlapping regular plane polygons, at least two of which are congruent, all have sides of length

. The polygons meet at a point

. Thus the three polygons form a new polygon with

as an interior point. What is the largest possible perimeter that this polygon can have?

be a sequence of integers such that

be the minimal and maximal possible values of

A tetrahedron with four equilateral triangular faces has a sphere inscribed within it and a sphere circumscribed about it. For each of the four faces, there is a sphere tangent externally to the face at its center and to the circumscribed sphere. A point

is selected at random inside the circumscribed sphere. The probability that

lies inside one of the five small spheres is closest to

The number of ordered pairs of integers