be a right triangle with

be the inscribed circle. Construct

be the inscribed circle of

the inscribed circle of

. The distance between the centers of 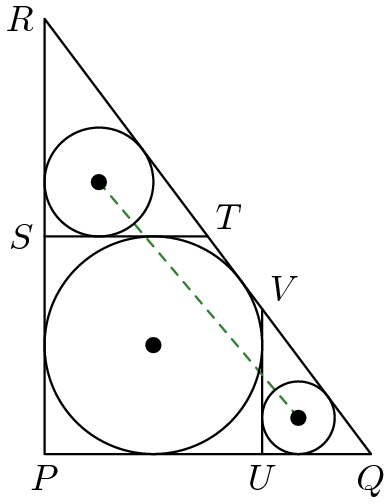 be at the origin. Using the formula

is the inradius (similarly define

to be the radii of

is the area, we find

. Or, the inradius could be directly by using the formula

are the legs of the right triangle and

is the hypotenuse. (This formula should be used only for right triangles.) Thus

lie respectively on the lines

. Since the ratio of corresponding lengths of similar figures are the same, we have

Let the centers of

, respectively; then by the distance formula we have 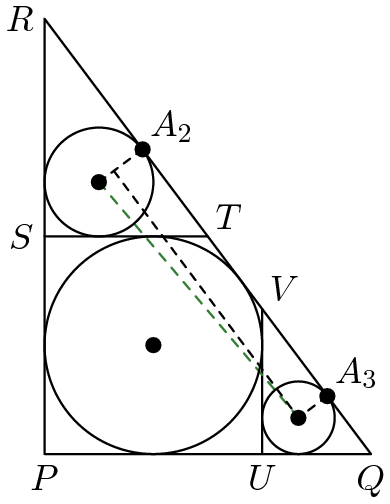 respectively the points of tangency of

By the Two Tangent Theorem, we find that

The radius of an incircle is

. The area of the triangle is equal to

and the semiperimeter is equal to

. The radius, therefore, is equal to

. Thus using similar triangles the dimensions of the triangle circumscribing the circle with center

. The radius of the circle inscribed in this triangle with dimensions

is found using the formula mentioned at the very beginning. The radius of the incircle is equal to

. Also using similar triangles, the dimensions of the triangle circumscribing the circle with center

by using the formula mentioned at the beginning is

The problem can be reduced to a

triangle for the initial calculations, where

is calculated to be (

is calculated to be (

. After we find the incenters the points can be scaled up by a factor of

for the final distance calculation.