During AMC testing, the AoPS Wiki is in read-only mode. No edits can be made.
AoPS Wiki
Resources Aops Wiki 2001 AMC 12 Problems/Problem 17

is obtuse if and only if

lies inside the circle with diameter

. (This follows for example from the fact that the inscribed angle is half of the central angle for the same arc.) 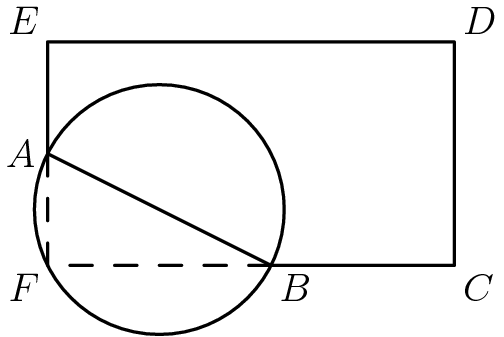 From the Pythagorean theorem the length of

, thus the radius of the circle is

, and the area of the half-circle that is inside

Therefore the probability that

Remember that an obtuse angle is any angle greater than a right angle (90 degrees). This means that if we can figure out all of the points at which

creates a right angle with

, any points within these bounds will yield an obtuse angle. Notice that by the Pythagorean theorem, the length of

. Also notice that when there is a right angle at

becomes the hypotenuse. Therefore, the sum of the squares of lengths

. This can be written as an equation.

, then the distance from

. Accordingly, the distance from

. Completing the square for both

, or the equation of a circle with center

. Graphing both the pentagon and the circle, we see that the area enclosed is a semicircle. This is

. Calculating the area of the pentagon yields

. The probability of point P being within the bounds of the semicircle is then

lies on the semicircle with center

, the angle is obtuse if and only if the point

lies inside this semicircle. The semicircle lies entirely inside the pentagon, since the distance, 3, from

. Then the area of the pentagon is

and the area of the semicircle is