Three points are chosen randomly and independently on a circle. What is the probability that all three pairwise distance between the points are less than the radius of the circle?

The first point is placed anywhere on the circle, because it doesn't matter where it is chosen.

The next point must lie within

degrees of arc on either side, a total of

chance. The last point must lie within

degrees of both points.

degrees arc(if the first two are

degrees apart), with a

probability. The maximum amount of freedom we have to place the third point is a

degree arc(if the first two are the same point), with a

As the second point moves farther away from the first point, up to a maximum of

degrees, the probability changes linearly (every degree it moves, adds one degree to where the third could be).

Therefore, we can average probabilities at each end to find

to find the average probability we can place the third point based on a varying second point.

Therefore the total probability is

We will use geometric probability.

The first point can be anywhere. Each point must be

or less away from each other.

be the amount of radians away the second point is from the first. We limit

be the amount of radians away the third point is from the first. We limit

We now begin plotting these on the coordinate grid.

First note that the area of the points that

can be (ignoring the conditions) is

(remember what we restricted

Now, we can graph the equations we deduced on the coordinate grid. That should look like this: 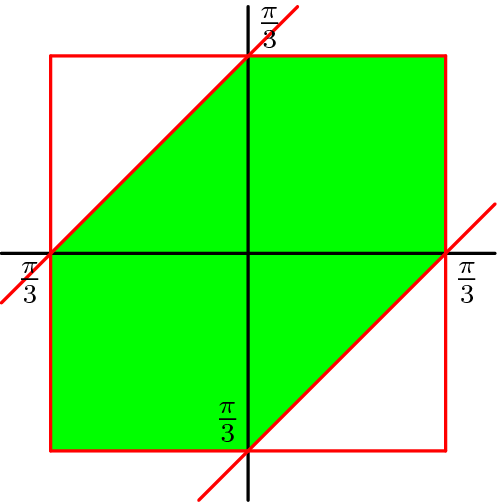 The area of the shaded region can be calculated in many ways. Eventually, you will find that the area is

Thus, the probability is