for any factorial is given by the well-known algorithm

It is rational to guess numbers right before powers of

because we won't have any extra numbers from higher powers of

. As we list out the powers of 5, it is clear that

. Applying the algorithm, we see that our answer is

Clearly, the power of

is larger or equal than the power of

which divides it. Hence we are trying to minimize the power of

. Each fifth term is divisible by

, and so on. Hence the total power of

only finitely many terms in the sum are non-zero.)

In our case we have

, so the largest power of

that will be less than

. Therefore the power of

. The same is true for

Intuition may now try to lure us to split

as evenly as possible, giving

. However, this solution is not optimal.

To see how we can do better, let's rearrange the terms as follows: 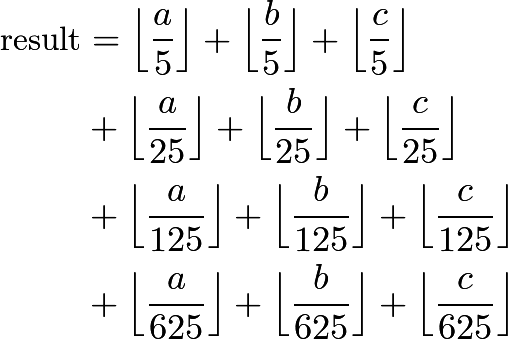 More precisely, we can now notice that for any positive integers

Hence we get that for any positive integers

the result is at least

If we now show how to pick

so that we'll get the result

Consider the row with

in the denominator. We need to achieve sum

in this row, hence we need to make two of the numbers smaller than

does this, and it will give us the largest possible remainders for

in the other three rows, so this is a pretty good candidate. We can compute

and verify that this triple gives the desired result