is the altitude to

be the circle having

as a diameter. Let

be a point outside

are both tangent to circle

. The ratio of the perimeter of

; let the tangents from

. Then the perimeter of

It remains to compute

, so the radius of

. We may also compute

. By the double-angle formula

, it turns out that

Now we can get

so multiplying everything by

lets us solve for

be center of the circle and

be the two points of tangent such that

Since the ratios between corresponding lengths of two similar diagrams are equal, we can let

, then we have Area

Now the equation looks very complex but we can take a guess here. Assume that

) that can be expressed as

. Look at both sides; we can know that

has to be a multiple of

and it's reasonable to think that

so that we can cancel out the

on the right side of the equation.

, the other solution of this equation is negative which can be ignored. Hence

. Now the area of

. Now we can compute the area of

in two ways: by heron's formula and by inradius times semiperimeter, which yields

. Plugging this back in, the perimeter of

so the ratio of the perimeter to

Recall that the distance from a point outside a circle to that circle is the same along both tangent lines to the circle drawn from the point.

Recall also that the length of the altitude to the hypotenuse of a right-angle triangle is the geometric mean of the two segments into which it cuts the hypotenuse.

. Since the lengths of the sides of

, the square of its area by Heron's formula is

, and so the square area is

and the whole perimeter is

, so the ratio of the perimeter of 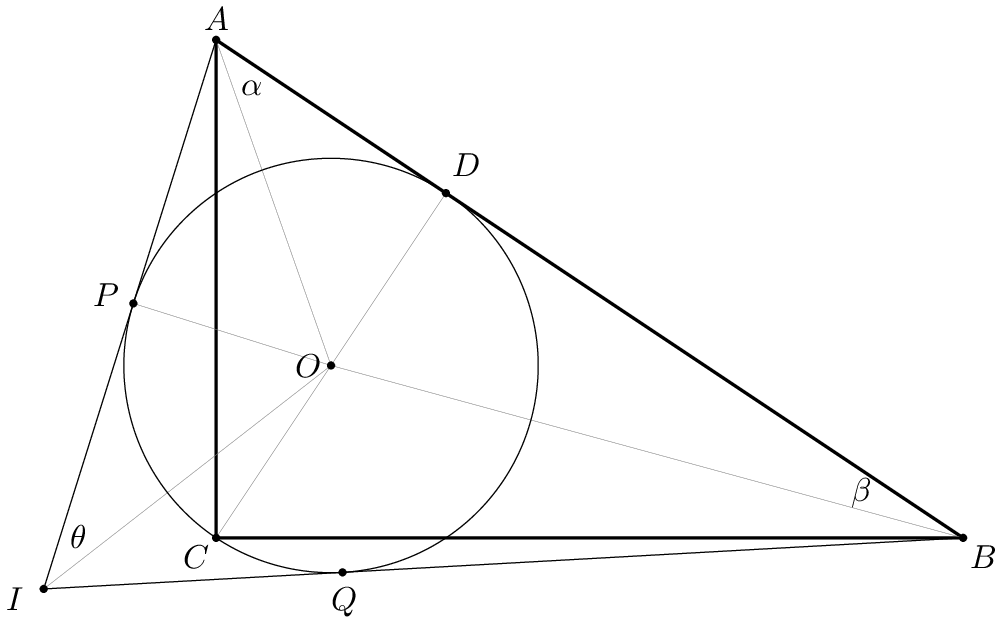 . The desired ratio is then

We need to find

in two ways we get

. Using this value of

This solution is not a real solution and is solving the problem with a ruler and compass.

. Then, drawing the tangents and intersecting them, we get that

. We then find the ratio to be around

. Using long division, we find that this ratio is approximately 2.666, which you should recognize as

. Since this seems reasonable, we find that the answer is

.As we know that the diameter of the circle is the height of

. But we know that

According to the basic computation, we can get that

So we know that

according to the tangent addition formula. Hence, it is not hard to find that the length of

. According to basic addition and division, we get the answer is