A cube with side length 10 is suspended above a plane. The vertex closest to the plane is labeled

. The three vertices adjacent to vertex

to the plane can be expressed as

. The distance from a point

to a plane with equation

so the (directed) distance from any point

. So, by looking at the three vertices, we have

, and by rearranging and summing,

Solving the equation is easier if we substitute

. The distance from the origin to the plane is simply

, which is equal to

Let the vertices with distance

is formed with side length

. We care only about the

. It is well known that the centroid of a triangle is the average of the coordinates of its three vertices, so

. Designate the midpoint of

is parallel to the plane because the

, and the median contains

. We seek the angle

perpendicular to the plane formed by

with the plane under the cube. Since the median is parallel to the plane, this orthogonal line is also perpendicular

It is also known that the centroid of

is a third of the way between vertex

, the vertex farthest from the plane. Since

is a diagonal of the cube,

. So the distance from the

to the centroid is

Thus the distance from 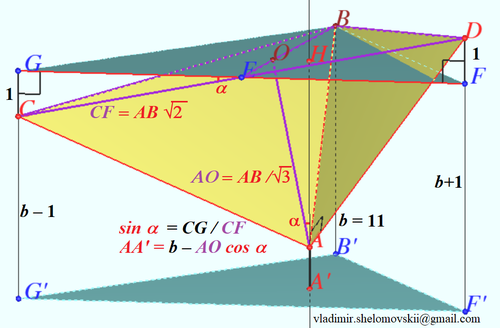