Note that there are only two possible locations for points

, as they are both

, so they are the two points where a circle centered at

and a circle centered at

be the point on the opposite side of

the point on the same side of

(also the measure of angle

This problem is pretty much destroyed by complex plane geometry, which is similar to vector geometry only with the power of easy rotation. Place the triangle in the complex plane by letting

be the origin, placing

along the x-axis, and

in the first quadrant. Let

denotes the sixth root of unity,

is accomplished by multiplication by

(and clockwise rotation is multiplication by its conjugate). So, we can find

is the apex angle in the isoceles triangle with sides

, so this simplifies further to:

Now to find some magnitudes, which is easy since we chose

Adding these up, the sum equals

(Isn't that nice?) Notice that

, so that this sum simplifies further to

, which is found using the law of cosines on that isoceles triangle:

This method uses complex numbers with

as the origin. Let

, without loss of generality, let

One can similarly get

, so the desired sum is equal to

, so the sum of these two is just

. Therefore the desired sum is equal to

This method uses the observation that every point is equidistant from

. Without loss of generality, we can assume

We can start off by angle chasing the angles around

. Then, we note that

We can now angle chase the angles about

. We can use all the congruent equilateral triangles in a similar manner obtaining:

Expanding this with the Cosine Subtraction Identity we get

too. We use Law of Cosines on

Expanding this with the Cosine Addition Identity we get

Adding this to our equation for

by using Law of Cosines on

. Substituting it in gives

Therefore the desired sum is equal to 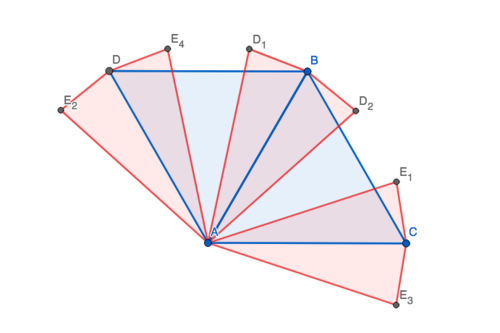 We create a diagram. Each of the red quadrilaterals are actually 60 degree rotations about point A. We easily get that

, we can start angle chasing. In particular, we will like to find

, since then we will be able to set up some Law Of Cosines.

That was convenient! We can do it with the other angle as well.

. That means we are able to set up Law of Cosines, on triangles

, with some really convenient angles. Let

We subtract and get:

We add and get:

Thus our answer is