Take a force-overlaid inversion about

map to each other. As

was originally the diameter of

is still the diameter of

is preserved. Note that the midpoint

map to each other, and are isogonal. It follows that

, and thus we can let

, from which by Ptolemy's we see

. We conclude the answer is

Side Note: You might be wondering what the motivation for this solution is. Most of the people who've done EGMO Chapter 8 should recognize this as problem 8.32 (2009 Russian Olympiad) with the computational finish afterwards. Now if you haven't done this, but still know what inversion is, here's the motivation. We'd see that it's kinda hard to angle chase, and if we could, it would still be a bit hard to apply (you could use trig, but it won't be so clean most likely). If you give up after realizing that angle chasing won't work, you'd likely go in a similar approach to Solution 1 (below) or maybe be a bit more insightful and go with the elementary solution above.

Finally, we notice there's circles! Classic setup for inversion! Since we're involving an angle-bisector, the first thing that comes to mind is a force overlaid inversion described in Lemma 8.16 of EGMO (where we invert with radius

, then reflect over the

). We try applying this to the problem, and it's fruitful - we end up with this solution. -MSC

Use the angle bisector theorem to find

, and use Stewart's Theorem to find

. Use Power of Point

. Use law of cosines to find 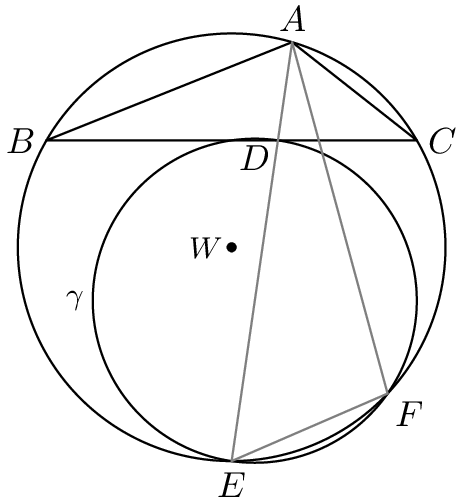 , where we use signed lengths. Writing

, and the Law of Cosines in

is a diameter), so

Plugging in all our values into equation

The Law of Cosines in

be the midpoint of segment

is the angle bisector, it follows that

is a diameter, so

are both subtended by arc

, so they are equal. Thus 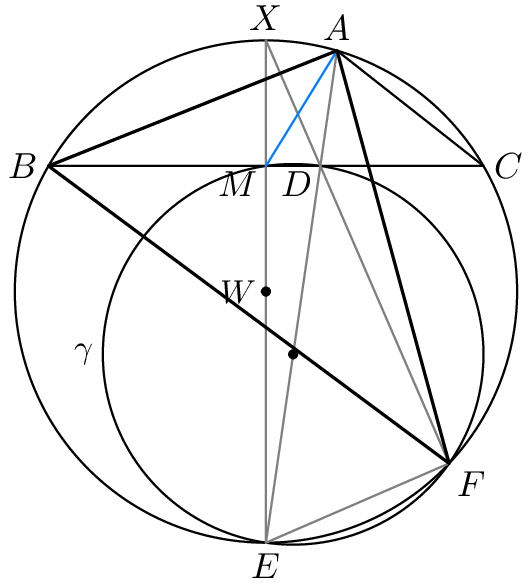 By Stewart's Theorem on

Use the angle bisector theorem to find

, and use Stewart's Theorem to find

. Use Power of Point

. Then use the Extended Law of Sine to find that the length of the circumradius of 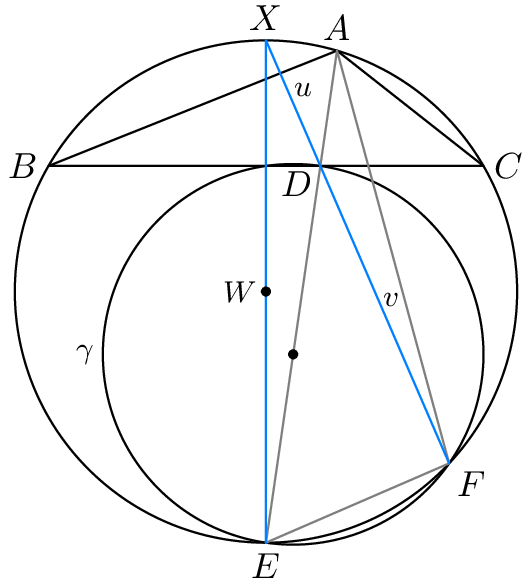 is the diameter of circle

By Power of Point

. Combining with above, we get

and the ratio of similarity is

Use Law of Cosines in

is the midpoint of major arc

is equilateral. Notice now that

Use Law of Cosines on

Use Ptolemy's Theorem on 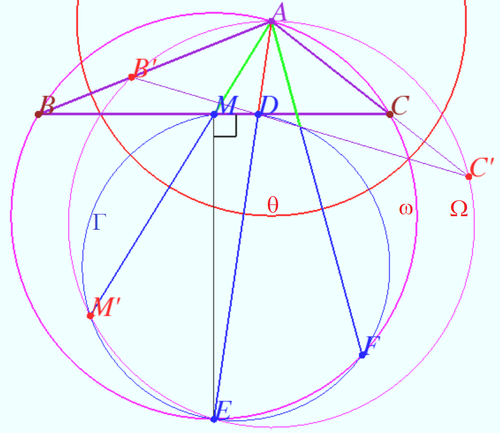 Let M be midpoint BC. Let

We calculate the length of some segments. The median

One can use Stewart's Theorem in both cases.

We use Power of Point

We consider the inversion with respect

is image of line

which is symmetric with respect to

which is symmetric to

We use Power of Point