are midpoints of line segments

respectively. What is the area of rectangle

Consider a tetrahedron with vertices at

-plane. The length of

is just one-half of

because it is the midsegment of

The same concept applies to the other side lengths.

. The line segments lie on perpendicular planes so quadrilateral

is a rectangle. The area is 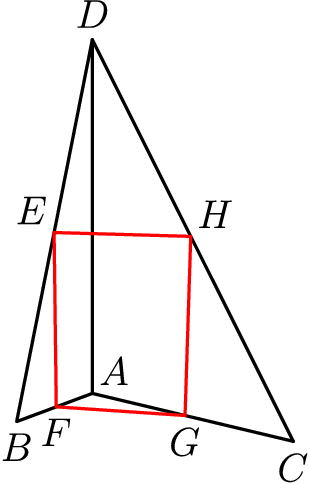 Computing the points of

are parallel. Similarly, the vector

. Again, these are equal in both magnitude and direction, so

is sufficient evidence that the figure is a parallelogram, since the vectors are not only point in the same direction, but are of the same magnitude, but the other vector

is needed to find the angle between the sides.

Taking the dot product of vector

, which means the two vectors are perpendicular. (Alternately, as above, note that vector

goes directly down on the z-axis, while vector

has no z-component and lie completely in the xy plane.) Thus, the figure is a parallelogram with a right angle, which makes it a rectangle. With the distance formula in three dimensions, we find that

, giving an area of