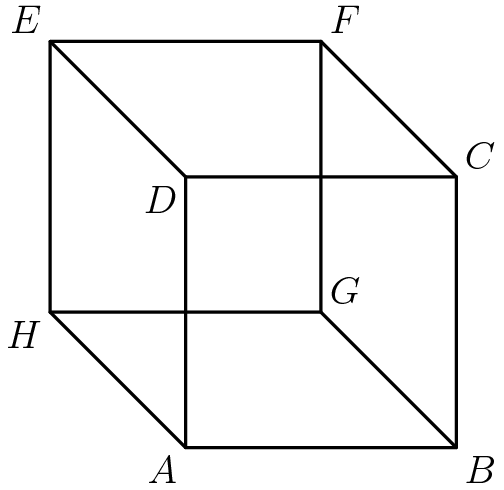 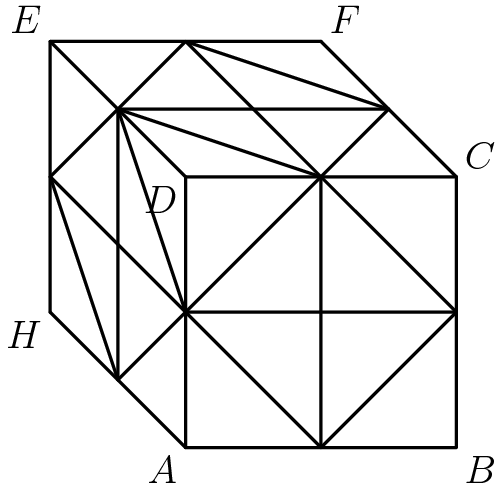 We need two different kinds of planes that only intersect

at the mentioned segments (we call them traces in this solution). These will be all the possible

First, there are two kinds of segments joining the midpoints of every pair of edges belonging to the same face of

: long traces are those connecting the midpoint of opposite sides of the same face of

, and short traces are those connecting the midpoint of adjacent sides of the same face of

of a face of

. Then it must also contain some trace

of an adjacent face of

. So, there are three possibilities for

, each of which determines a plane

makes an acute angle with

is an equilateral triangle made by three short traces. There are

of them, corresponding to the

is a long trace.

is a rectangle. Each pair of parallel faces of

of these rectangles so there are

is the short trace other than the one described in case 1, i.e.

makes an obtuse angle with

. It is possible to prove that

contains no short traces. This can only make

be a square enclosed by long traces. There are

In total, there are

. So the maximum of

On the other hand, the most economic way to generate these long and short traces is to take all the planes in case 3 and case 4. Overall, they intersect at each trace exactly once (there is a quick way to prove this. See note #2 below.) and also covered all the

traces. So the minimum of

. The answer to this problem is then

be the other endpoint of

. Draw a line through

. This line passes through the center

of the cube and therefore we see that the reflection of

is the regular hexagon

. To count the number of these hexagons, just notice that each short trace uniquely determine a hexagon (by drawing the plane through this trace and the center), and that each face has

short traces. Therefore, there are

Note 2: The quick way to prove the fact that none of the planes described in case 3 and case 4 share the same trace is as follows: each of these plane contains the center and therefore the intersection of each pair of them is a line through the center, which obviously does not contain any traces.