Twentieth Annual UNC Math Contest Final Round January 21, 2012. Three hours; no electronic devices. Show your work for each problem. Your score will be based on your answers and your written work, including derivations of formulas you are asked to provide.

• The positive integers are

• An ordinary die is a cube whose six faces contain

(a) What is the largest factor of

that is not a multiple of

, then what is the largest perfect square that is a factor of

Four ordinary, six-sided, fair dice are tossed. What is the probability that the sum of the numbers on top is

Mrs. Olson begins a journey at the intersection of Avenue

and First Street in the upper left on the attached map. She ends her journey at one of the Starbucks on Avenue

. There is a Starbucks on Avenue

at every intersection from First Street through Sixth Street! If Mrs. Olson walks only East and South, how many different paths to a Starbucks on Avenue

can she take? Note that Mrs. Olson may pass one Starbucks on her way to another Starbucks farther to the East.

(a) What is the largest integer

(b) For how many positive integer values of

is divided by seven?

is externally tangent to a circle of radius

and both circles are tangent to a line. Find the area of the shaded region that lies between the two circles and the line. 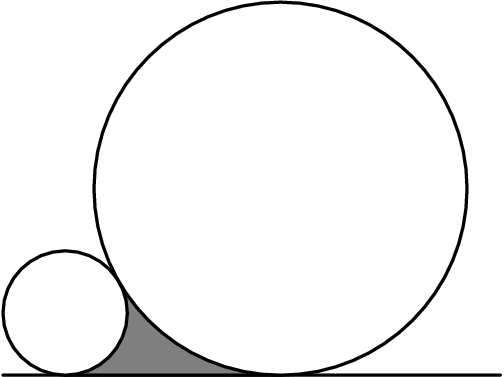 An ordinary fair die is tossed repeatedly until the face with six dots appears on top. On average, what is the sum of the numbers that appear on top before the six? For example, if the numbers

. Do not include the

Treasure Chest . You have a long row of boxes. The 1st box contains no coin. The next

coins. And so on, so that there are

coins. How many coins do you get when you combine the coins from all the boxes that contain

. That is, give a formula that does not use ellipsis

(b) Combine the coins from the first

boxes. What is the smallest value of

for which the total number of coins exceeds

? (Remember to count the first box.)

(a) How many distinct (i.e., non-congruent) integer equiangular hexagons have no side length greater than

? Two such hexagons are shown.

(A figure and its mirror image are congruent and are not considered distinct. Translations and rotations of one another are also congruent and not distinct.)

that meets as many of the following conditions as you can: the sum of the roots is

, the sum of the squares of the roots is

, the sum of the cubes of the roots is

, and the sum of the

th powers of the roots is