. From the conditions, let's deduct some convenient conditions that seem sufficient to solve the problem.

degrees, we can use the area formula to get

Finally, using the law of cosine for triangle 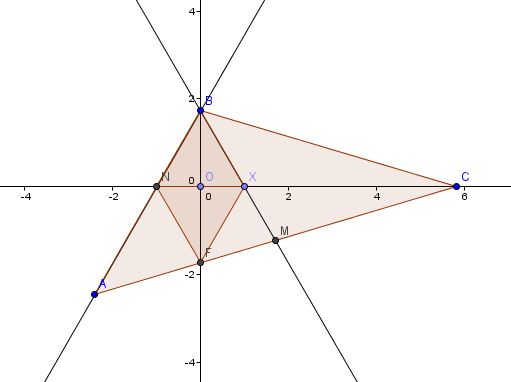 so that the sides of equilateral triangle

The purpose of this is to ease the calculations we make in the problem. Given this, we aim to find the length of segment

so that we can un-dilate triangle

by dividing each of its sides by

. Doing so will make it so that

, as desired, and doing so will allow us to get the length of

, whose square is our final answer.

the foot of the altitude from

On the coordinate plane, position

lie on the x-axis. Since points

must also lie on the x-axis. Additionally, since

, meaning that we can position point

. We can then position

. Quickly note that, because

must pass through the point

We proceed to construct a system of equations. First observe that the midpoint

, and we can plug in these coordinates into the equation of line

For our second equation, notice that line

must also lie on this line, and we can substitute coordinates again to get

, which in turn simplifies into

when dividing the entire equation by

Using the quadratic formula, we have that

Here, we discard the positive root since

must lie to the left of the y-axis. Then, the coordinates of

has half the length of side

, we have that the length of

Now, we divide each side length of

By some angle-chasing, we find that

. From here, construct a point

. Note that we want to compute

Since we constructed point

. From the variables that we already set up, we know that

denote the foot of the perpendicular from

is equilateral, let's assume the sides of them are all

, and denote the length of

, applying the angle bisector theorem and we can get

. Now applying LOC, we can get

. Now applying the Stewart theorem in

, after simplifying, we get

. After observation, the main key for this problem is

, so we can solve

. Now back solving the first equation we can get that

cuz the negative one can't work. After solving, we can get that

Denote the length of

Denote the intersection of

By the angle bisector theorem, we have that

We apply the Law of Cosines on