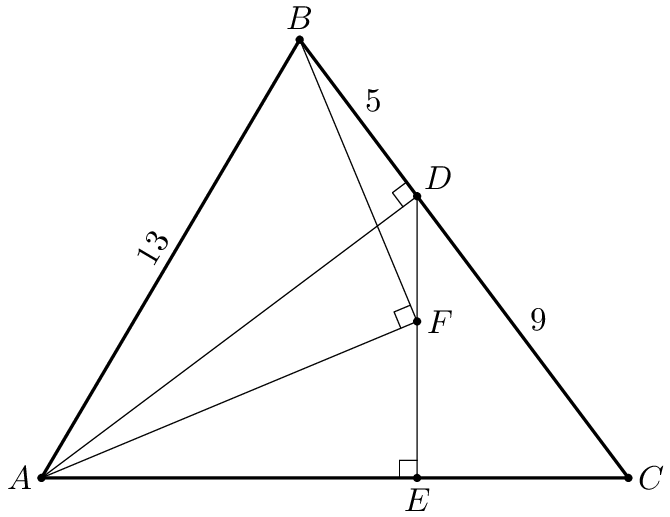 is cyclic. It follows that

are similar. In addition,

. We can easily find

So, the ratio of the longer leg to the hypotenuse of all three similar triangles is

, and the ratio of the shorter leg to the hypotenuse is

. By Ptolemy's Theorem, we have

Using the similar triangles in triangle

is cyclic, implying that

If we draw a diagram as given, but then add point

in order to use the Pythagorean theorem, we end up with similar triangles

is the length of

. Using the Pythagorean theorem, we now get

can be found out noting that

through base times height (since

, and squaring and adding both sides and subtracting a 169 from both sides gives

Solution 4 (Power of a Point)

via the Pythagorean Theorem or by using similar triangles. Next, because

is an altitude of triangle

. Using that, we can use the Pythagorean Theorem and similar triangles to find

all lie on a circle whose diameter is

. Let the point where the circle intersects

. Using power of a point, we can write the following equation to solve for

Using that, we can find

We can use power of a point again to solve for