turns it will be facing the opposite direction and move

units in the original direction. This means that every

moves, the bee will move

units in each direction of

We want to find the displacement vector for every

moves. Factoring out the

for now (which flips the direction), we draw a quick diagram of one unit in each direction. 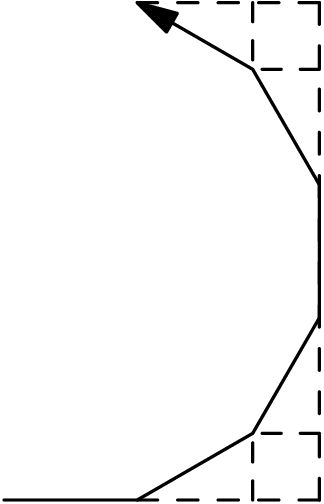 Using the 30-60-90 triangles, it is clear that the displacement vector (factoring back in the

To compute the distance to

, we can compute the position of

moves) and then subtract the vector from

moves, so the total displacement vector to

The bee moves at an angle of

, so subtracting it means moving an angle of

. Since the vector is

Therefore the total displacement vector to

. The displacement is thus

Fun fact: The displacement to

is the same as for

be the origin. East would be the real axis in the positive direction. Then we can assign each

a complex value. The displacement would then be the magnitude of the complex number.

Notice that after the

th move the value of

. Also notice that after six moves the bee is facing in the opposite direction. And because we have found a recursion, we can add these up.

which eventually simplifies to

and this is a

triangle which has ratios of

so the magnitude is