be an acute triangle, with

are the feet of the perpendiculars from

prove that the points 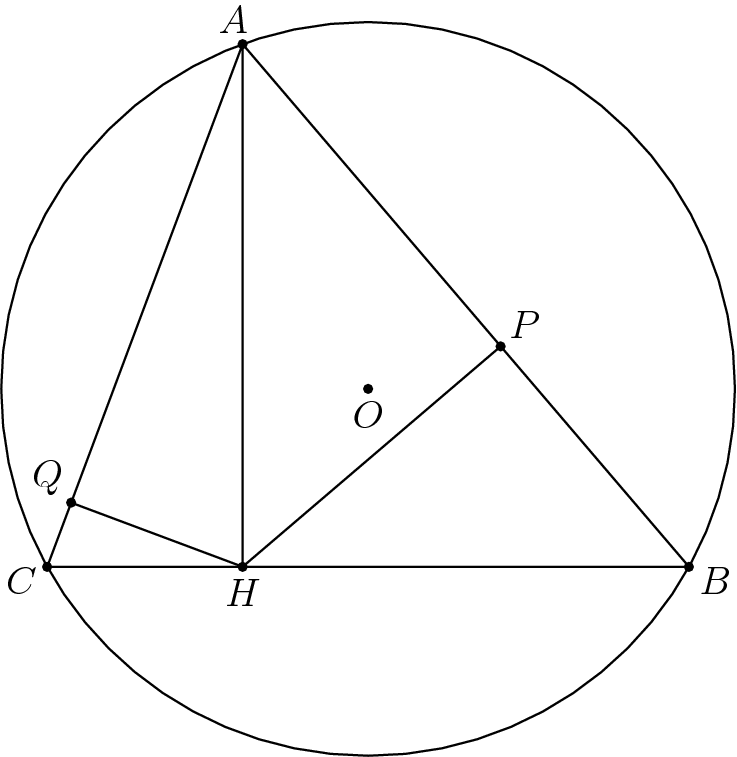 (just use similar triangles or standard area formulas). Then by Power of a Point,

by a factor of

and reflects about the

, and its distance from

, hence we conclude that

We will use barycentric coordinates with respect to

The given condition is equivalent to

Therefore, we must show that

Expanding, we must prove

The left side is equal to

The right side is equal to

which is equivalent to the left hand side. Therefore, the determinant is

denote the lengths of segments

denote the measures of

denote the circumradius of

Since the central angle

subtends the same arc as the inscribed angle

Similarly, one can show that

(One could probably cite this as well-known, but I have proved it here just in case.)

The Extended Law of Sines states that:

are both right angles, we get

so we conclude that

are collinear, and we are done. (We also obtain the extra interesting fact that

Draw the altitude from

, and let the foot of this altitude be

Then, by the Right Triangle Altitude Theorem on triangle

Substituting this into our previous equation gives

by the problem condition.

By dropping an altitude from

and using the same method, we can find that angle

are collinear and we are done.

. Spamming the foot from point to segment formula, we obtain

We now simplify the given length condition:

After some factoring (or expanding) that takes about 15 minutes, this eventually reduces to

Proof: We compute the area of

be the circumradius of

First, by extended law of sines,

Second, we compute the area using

Equating these two expressions for the area of

and reducing, we get

Substituting into the bolded equation, we get

The original length condition can be written as

We can prove analogously that