is inscribed in triangle

the angle bisector of

is the incenter of triangle

is a rhombus. It follows that

It is given that

, and by basic properties of the incenter,

. Since the rotation between the two triangles in 90 degrees,

is parallel to the bisector of

, which is perpendicular to

chosen as distinct vertices of triangle

as sides opposite to angles

, respectively. Place the triangle in the Euclidean plane with

at the origin and

on the positive x-axis. Assume without loss of generality that C is acute.

Consider the sides of the pentagon as vectors and note that

as the angles made between the positive x-axis and

, respectively. Considering the x and y coordinates of the vectors in

, and the triangle is isosceles. In this case, it is clear by symmetry that

is vertical. Further, since point

must be vertical as well.

For the remainder of the proof, assume

. Note further that the slope of the line defined by the vector formed by summing vectors

is this expression. Since

can be formed by dividing expressions in

Determine the coordinates of

by drawing perpendiculars from

to the sides and vertices of the triangle. By exploiting congruence between pairs of right triangles that share a vertex, one can partition

. From here it is clear that

in any acute triangle

. Note also that the perpendicular from

, then it can be similarly shown that

but that the remaining angles of this form are still

follows in this case as well.

We can conclude the slope of

by the Law of Sines and rearrangement.

, this equation is equivalent to

This equation is equivalent to 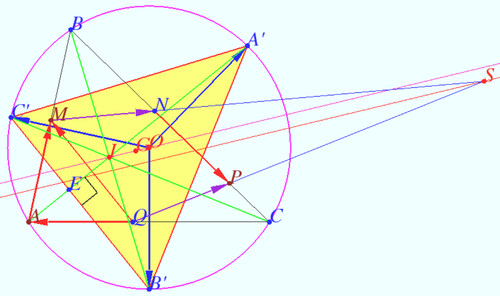 be the arc midpoints of

is the Euler line of 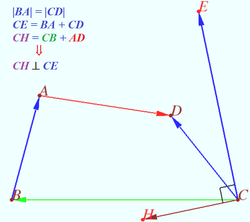 is in clockwise direction,

therefore in accordance with Claim

This sum is parallel to