. The least possible value of 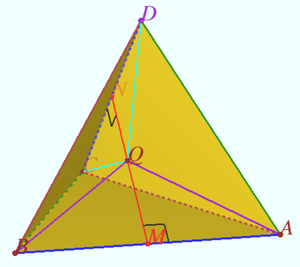 . The given conditions imply that

both lie on the common perpendicular bisector of

is that common perpendicular bisector. Points

with respect to line

is a point in space and

is the point symmetric to

with respect to line

. It remains to minimize 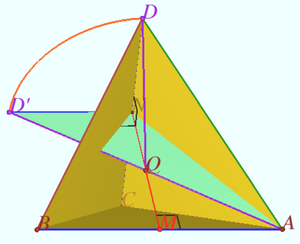 on the side of

is a right angle,

, and equality occurs when

is the median of

, the Length of Median Formula shows that

. By the Pythagorean Theorem

. The requested sum is

be the point which minimizes

denote the midpoints of

is a perpendicular bisector of both segments

is any point inside tetrahedron

, its orthogonal projection onto line

-value; hence we conclude that

must lie on the line joining the midpoints of

be the centroid of triangle

(by vectors). If we define

and so on. But from symmetry we have

Now we use the fact that an isosceles tetrahedron has circumradius 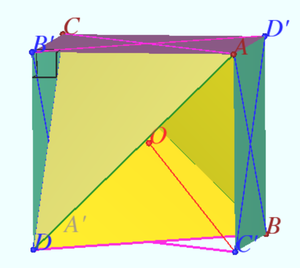 This parallelepiped is right-angled, therefore it is circumscribed and has equal diagonals. The center O of the circumscribed sphere (coincide with the centroid) has equal distance from each vertex. Tetrachedrons

are congruent, so point of symmetry O is point of minimum

is the circumradius of parallelepiped.