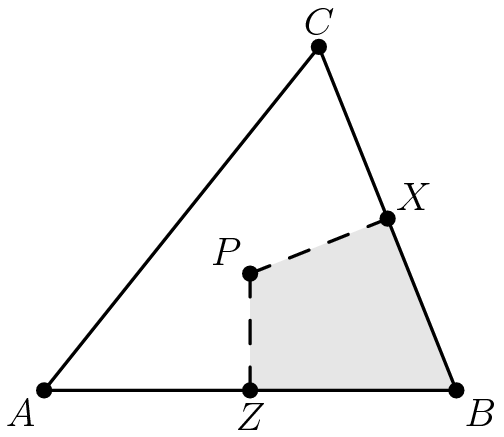 The set of all points closer to point

lie to the right of the perpendicular bisector of

in the diagram), and the set of all points closer to point

lie below the perpendicular bisector of

in the diagram). Therefore, the set of points inside the triangle that are closer to

is bounded by quadrilateral

. The coordinates of point

is the solution to the system of equations defined by lines

. Using the point-slope form of a linear equation and the fact that the slope of the line perpendicular to a line with slope

, the equation for line

and the equation for line

. The solution of this system is

. Using the shoelace formula on quadrilateral

. Finally, the probability that a randomly chosen point inside the triangle is closer to vertex

is the ratio of the area of quadrilateral

Since we know the coordinates of all three vertices of the triangle, we can find the side lengths:

. We notice that the point where the three distances are the same is the circumcenter - so we use one of the triangle area formulas to find the circumradius, since we know what the area is.

We rearrange to get 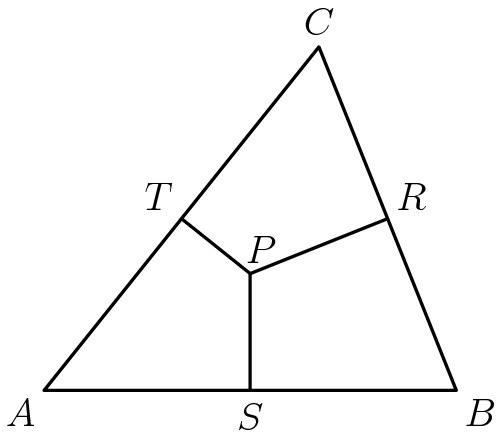 , so using the Pythagorean Theorem gives

. Similarly, we know that

. Lastly, we know that

. Therefore, our answer is

To start the problem, identify the two midpoints that connect

. This is because the midpoints of such lines is the mark at which the point will sway closer to vertex

, and the midpoint of

. Then, determine the line at which the distance between vertex

are the same. Assuming that

, we can create a simple equation:

Squaring both sides and then distributing, we get

, and thus there is no need to create another equation.

Divide both sides by 20, then simplify, and the line that represents equivalent distance between vertex

This line starts at the midpoint of

, and ends at the line

. Now that we have our four points that are

, we can calculate the area of the quadrilateral in which a point is closer to vertex

as opposed to either vertex

. Simply draw a rectangle that has the points

, and then subtract the two triangles that appear in between.

Thus, the area of the quadrilateral is

. Since the problem asks us for the probability that a point chosen inside the triangle is inside the quadrilateral, and because the area of

, which means the final answer is

Calculate the area of the triangle using the Shoelace Theorem on

Get the four points

by any method from the above solutions. Then use the Shoelace Theorem to find the area of the region we want:

Therefore the probability is

. Thus giving the final answer of

points of contact of the perpendiculars and the sides. Therefore our fraction is