be the circumcircle of acute triangle

. The perpendicular bisectors of

are either parallel or they are the same line.

The diagram is certainly not to scale, but the argument is sound (I believe) and involves re-ordering the construction as specified in the original problem so that an identical state of affairs results, yet in so doing differently it is made clear that the line segments in question are parallel.

Construct a right-angled triangle ABC'. Select an arbitrary point H along the segment BC', and from point H select an arbitrary point F such that the segment HF is perpendicular to the segment AB. Mark the distance from the intersection of HF and AB to B at B" (i.e., HF is a perpendicular bisector). It follows that the triangle B"FB is isosceles. Construct an isosceles triangle FHG. Mark the distance of AB" along AC' at C". (From here, a circle can be constructed according to the sets of points A, B, F, and A, B, G. Points F and G may be repositioned to allow for these circles to coincide; also, point H may be repositioned so that point C falls on the coinciding circle, understood that HG is the other perpendicular bisector.)

(N.B. Points D and E, as given in the wording of the original problem, have been renamed B" and C" here.) 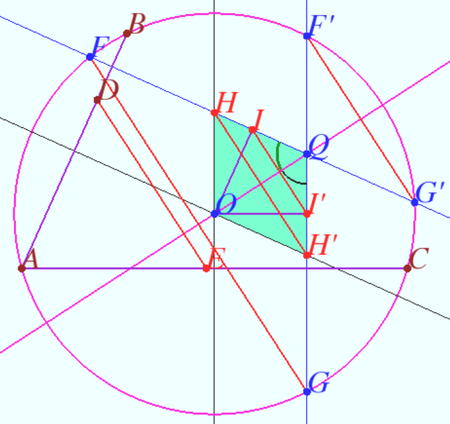 and the parallelism of its diagonal and the base of the triangle formed by the perpendiculars from one vertex of the rhombus.

The perpendicular bisectors of the segments

The distance from the line

Therefore, the distance between lines

Similarly, the distance between the lines

is formed by the intersection of two pairs of equidistant lines

is a parallelogram with equal heights

The feet of the heights

divide the sides of the rhombus in the same ratio, which means that the diagonal

of the rhombus is parallel to the segments

The angles between the diagonal of the rhombus and its sides are the same, so

are symmetrical with respect to the diameter

Therefore, these three lines are parallel to