Cauchy's Integral Theorem is one of two fundamental results in complex analysis due to Augustin Louis Cauchy. It states that if

is a complex-differentiable function in some simply connected region

is a path in

of finite length whose endpoints are identical, then

The other result, which is arbitrarily distinguished from this one as Cauchy's Integral Formula, says that under the same premises if

is a circle of center

We will prove the theorem for the case when

is a triangle. We leave it as an exercise to verify that all other paths can be sufficiently approximated with triangles.

is a constant function.

be a triangle; let

be its vertices, Let

is linear on each of these subintervals. Let

be the constant value of

Now we prove the main result.

We construct a sequence parths

be the vertices of

be the respective midpoints of

so that the quantity

denote the longest side length in the triangle

denote the perimeter of

denote the closed region bounded by

is a descending chain of nonempty closed sets, the set

is not empty, so let us choose some

that is an element of

is differentiable at the point

, then this inequality holds for all

be a parameterization of 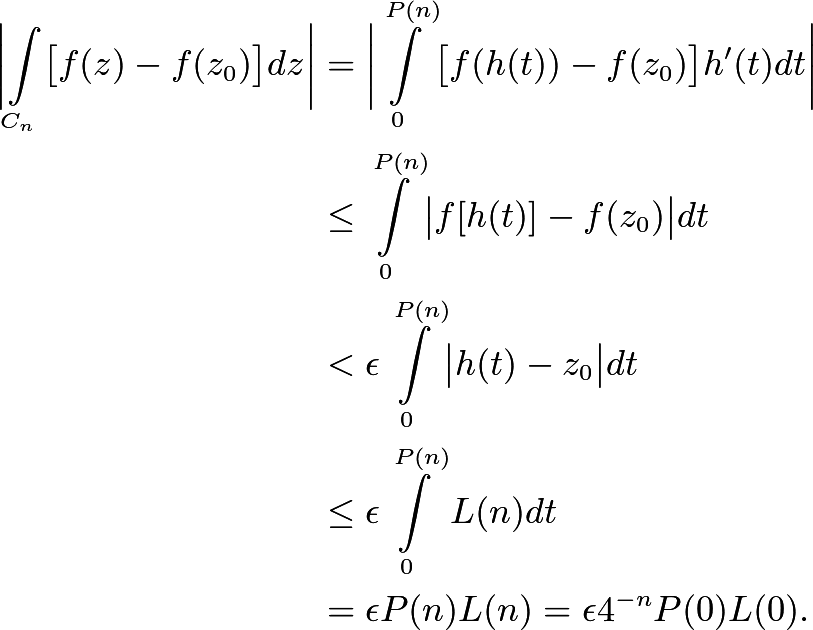 can be arbitrarily small, it follows that

We use Green's Theorem.

denote the real numbers such that

be the functions mapping

be the region bounded by

. Then by Green's theorem,

The Cauchy Integral Theorem guarantees that the integral of a function over a path depends only on the endpoints of a path, provided the function in question is complex-differentiable in all the areas bounded by the paths. Indeed, if

are two paths from