Cauchy's Integral Formula is a fundamental result in complex analysis. It states that if

is a complex-differentiable function on

in the interior of the region bounded by

denote the interior of the region bounded by

denote a simple counterclockwise loop about

. Since the interior of the region bounded by

is an open set, there is some

. For such values of

by application of Cauchy's Integral Theorem.

we may pick an arbitarily small

(again by Cauchy's Integral Theorem), it follows that

can simultaneously become arbitrarily small, it follows that 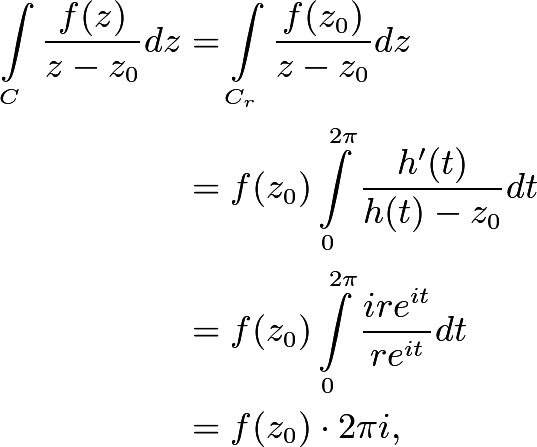 which is equivalent to the desired theorem.

By induction, we see that the

. In other words, if a function

th derivative exists in general, it follows that the

th derivative is continuous. This is not true for functions of real variables! For instance the real function

is everywhere differentiable, but its derivative is mysteriously not continuous at

. In complex analysis, the mystery disappears: the function

has an essential singularity at

, so we can't establish a derivative there in any case.

The theorem is useful for estimating a function (or its

th derivative) at a point based on the behavior of the function around the point. For instance, the theorem yields an easy proof that holomorphic functions are in fact analytic.