During AMC testing, the AoPS Wiki is in read-only mode. No edits can be made.
AoPS Wiki
Resources Aops Wiki 2001 AIME I Problems/Problem 15

are randomly written on the faces of a regular octahedron so that each face contains a different number. The probability that no two consecutive numbers, where

are considered to be consecutive, are written on faces that share an edge is

Choose one face of the octahedron randomly and label it with

Clearly, the labels for the A-faces must come from the set

, since these faces are all adjacent to

ways to assign the labels for the A-faces.

The labels for the B-faces and C-face are the two remaining numbers from the above set, plus

. The number on the C-face must not be consecutive to any of the numbers on the B-faces.

From here it is easiest to brute force the

numbers on the B and C faces:

There is a total of

ways to randomly fill in the rest of the octahedron. So the probability is

Consider the cube formed from the face centers of the regular octahedron. Color the vertices in a checker board fashion. We seek the number of circuits traversing the cube entirely composed of diagonals. Notice for any vertex, it can be linked to at most one different-colored vertex, i.e. its opposite vertex. Thus, there are only two possible types of circuits (

ways to arrange the other two white vertices. Since the template has a period of

circuits of type I.

ways to arrange the black vertices and consequently the white vertices. Since the template has a period of

circuits satisfying the given condition, out of the

As in the previous solution, consider the cube formed by taking each face of the octahedron as a vertex. Let one fixed vertex be A. Then each configuration (letting each vertex have a number value from 1-8) of A and the three vertices adjacent to A uniquely determine a configuration that satisfies the conditions, i.e. no two vertices have consecutive numbers. Thus, the number of desired configurations is equivalent to the number of ways of choosing the values of A and its three adjacent vertices.

ways, since they aren't adjacent to each other, but they can't, after all, be consecutive values to A. For example, if A=1, then the next vertex can't be 1,2 or 8, so there are 5 choices. However, the next vertex also adjacent to A can be chosen in 4 ways; it can't be equal to 1,2,8, or the value of the previously chosen vertex. With the same reasoning, the last such vertex has 3 possible choices.

The total number of ways to choose the values of the vertices of the cube independently is 8!, so our probability is thus 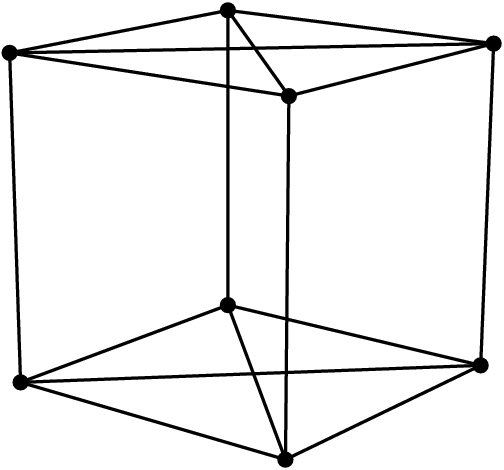 This is because each Hamiltonian cycle corresponds to eight unique ways to label the faces. Label the vertices

Case 1: Four of the vertical edges are used.

Case 2: Two of the vertical edges are used.

So, the probability is

As with some of the previous solutions, consider the cube formed by connecting the centroids of the faces on the octahedron. We choose a random vertex(hence fixing the diagram), giving us

ways as our denominator. WLOG, we color this start vertex red, and we color all

vertices adjacent to it blue. We repeat this for the other vertices.

Note that there is a 1-1 correspondence between the number of valid face numberings with rotational symmetry and the number of ways to move a particle to every vertex of the cube and returning to the start vertex with only diagonal moves. We can move along either short diagonals and long diagonals.

Next, note that we can only move from the red vertices to the blue vertices and back with long diagonals(since short diagonals keep us on the color we are currently on). Thus, it is easy to check that the only possible sequences of long and short diagonals are cyclic permutations of

cyclic permutations, and we can traverse the entirety of the red tetrahedron in

possibilities for our first step. However, once we make our first move, the path is fixed. This leaves us with

cyclic permutations in this case. After we choose one of the

red vertices to go to from the starting vertex and move to the blue tetrahedron, we are once again left with

choices to move to by similar logic to the first case. However, after we move back to the red tetrahedron, our choices are fixed. This leaves us with

Finally, summing and dividing by