During AMC testing, the AoPS Wiki is in read-only mode. No edits can be made.
AoPS Wiki
Resources Aops Wiki Difference between revisions of "2003 AMC 12A Problems/Problem 16"

Difference between revisions of "2003 AMC 12A Problems/Problem 16"

has a greater area than each of 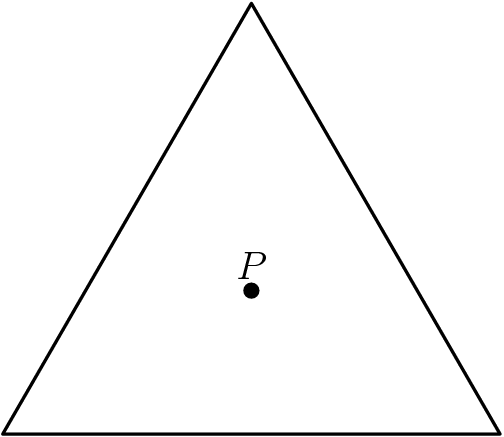 After we pick point

is symmetric for this purpose, and so the probability that

is the greatest area, or

, are all the same. Since they add to

has the greatest area is

We will use geometric probability. Let us take point P, and draw the perpendiculars to BC, CA, and AB, and call the feet of these perpendiculars D, E, and F respectively. The area of triangle ACP is simply

. Similarly we can find the area of triangles BCP and ABP. If we add these up and realize that it equals the area of the entire triangle, we see that no matter where we choose P, PD + PE + PF = the height of the triangle. Setting the area of triangle ABP greater than ACP and BCP, we want PF to be the largest of PF, PD, and PE. We then realize that PF = PD = PE when P is the incenter of ABC. Let us call the incenter of the triangle Q. If we want PF to be the largest of the three, by testing points we realize that P must be in the interior of quadrilateral QDCE. So our probability (using geometric probability) is the area of QDCE divided by the area of ABC. We will now show that the three quadrilaterals, QDCE, QEAF, and QFBD are congruent. As the definition of point Q yields, QF = QD = QE. Since ABC is equilateral, Q is also the circumcenter of ABC, so QA = QB = QC. By the Pythagorean Theorem, BD = DC = CE = EA = AF = FB. Also, angles BDQ, BFQ, CEQ, CDQ, AFQ, and AEQ are all equal to 90 degrees. Angles DBF, FAE, ECD are all equal to 60 degrees, so it is now clear that QDCE, QEAF, QFBD are all congruent. Summing up these areas gives us the area of ABC. QDCE contributes to a third of that area so