Difference between revisions of "2004 AMC 12A Problems/Problem 24" 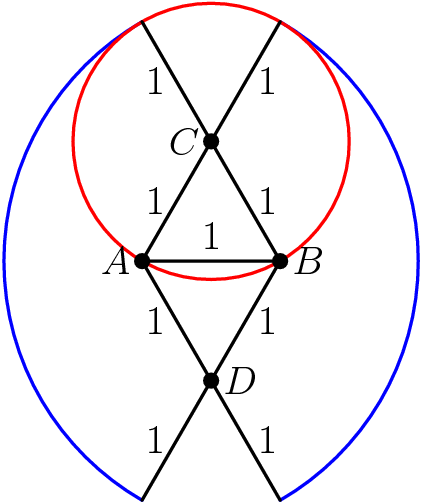 As the red circles move about segment

, they cover the area we are looking for. On the left side, the circle must move around pivoted on

. On the right side, the circle must move pivoted on

However, at the top and bottom, the circle must lie on both A and B, giving us our upper and lower bounds.

This egg-like shape is 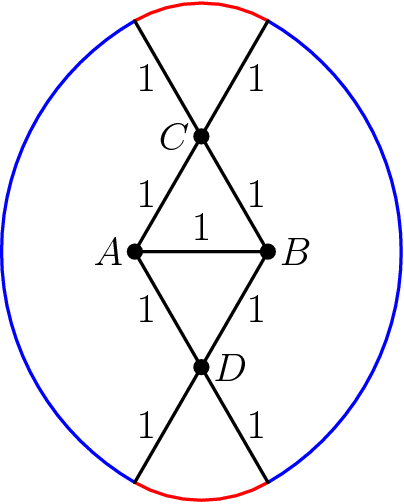 The area of the region can be found by dividing it into several sectors, namely

Credit to the Math Jam for the solution. (Diagram needed)

be an equilateral triangle "above" segment

. Now imagine having a "moving" circle of radius 1 pegged through point

and sliding it around as much as possible. The center of the circle must trace an arc of a circle

with radius 1 centered at

. In addition, the point on the "moving" circle farthest from

must always be 2 units away from

, so it traces out an arc of a circle

with radius 2 centered at

. Now the point on the "moving" circle farthest from

. Finally, one of the extreme positions of the moving circle is when the circle is centered at

. Let the circle centered at

. Once the center of the moving circle has moved from

, the moving circle will have finished one-fourth of its total motion. Thus,

is made up of 4 quadrants (consult the diagram in solution 1). Focus on the upper left quadrant of

. The upper left quadrant is bounded by arc

. The area of this region is equal to the area of sector

plus the area of sector

minus the area of