We can find the answer by working backwards. We begin with

on the bottom row, then the

goes to the right of the equal's sign in the row above. We find the smallest value

We repeat the same procedure except with

for the next row and

for the row after that. However, at the fourth row, we see that solving

, in which case it would be incorrect since

is not the greatest perfect square less than or equal to

. We continue on using this same method where we increase the perfect square until

can be made bigger than it. When we repeat this until we have 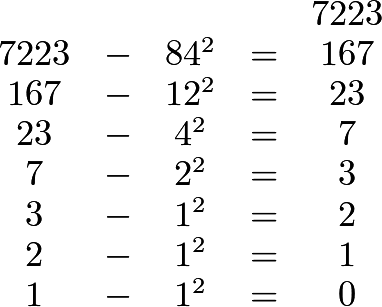 Hence the solution is the last digit of

Note: We can go up to

, and then notice the pattern of units digits alternating between

, so we do not need to calculate

Notice that to get the previous term, we must add the smallest square number, (let's call it

) such that the sum is less than

. Otherwise, instead of subtracting

from the previous term, we're subtracting a greater square number.

. Recall that to find the previous term, we must add a square number such that it is less than the next square number.

. What that means is that given a term

, we can find the previous term by adding

For example, to find the term that precedes

and the previous term is

. The last digit of