Six men and some number of women stand in a line in random order. Let

be the probability that a group of at least four men stand together in the line, given that every man stands next to at least one other man. Find the least number of women in the line such that

does not exceed 1 percent.

be the number of women present, and let _ be some positive number of women between groups of men. Since the problem states that every man stands next to another man, there cannot be isolated men. Thus, there are five cases to consider, where

refers to a consecutive group of

women. Since there are

possible places to insert the dividers, and we need to choose any three of these locations, we have

The second, third, and fourth cases are like the first, only that we need to insert two dividers among the

possible locations. Each gives us

ways, for a total of

The last case gives us

Therefore, the total number of possible ways where there are no isolated men is

The total number of ways where there is a group of at least four men together is the sum of the third, fourth, and fifth case, or

Thus, we want to find the minimum possible value of

The numerator is equal to

For the denominator, we get

Thus we seek the smallest positive integer value of

. Since the quadratic function's discriminant, or

, is positive, the polynomial has two distinct real roots.

we want must be either slightly larger than the positive root (if the other, smaller root is less than

(if the smaller root is greater than or equal to

does not satisfy the inequality, so the smaller root is irrelevant.

The solution to the polynomial is

We want the larger solution and to find the smallest integer greater than that solution. So, we will look only at the

Let's look at the discriminant: 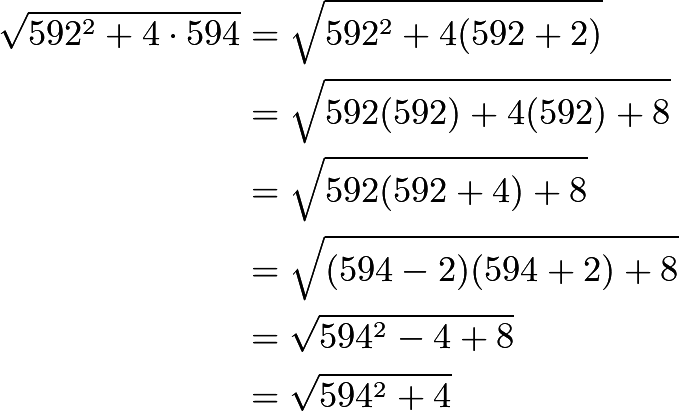