A pyramid has a square base with sides of length

It is often easier to first draw a diagram for such a problem. 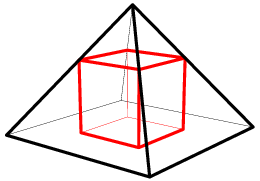 Sometimes, it may also be easier to think of the problem in 2D. Take a cross section of the pyramid through the apex and two points from the base that are opposite to each other. Place it in two dimensions.

The dimensions of this triangle are

because the sidelengths of the pyramid are

and the base of the triangle is the diagonal of the pyramid's base. This is a

triangle. Also, we can let the dimensions of the rectangle be

because the longer side was the diagonal of the cube's base and the shorter cube was a side of the cube.

triangles because the rectangle is perpendicular to the base, and they share a

angle with the larger triangle. Therefore, the legs of the right triangles can be expressed as

The volume of the cube is

be the slant height and the distance from one side of the base to the point right under the apex, respectively. Then using the Pythagorean Theorem, the altitude from the apex to the base is

Notice that the smaller pyramid on top of the cube is similar to the larger pyramid. Thus, letting

be the edge length of the cube, then the altitude of the smaller pyramid is