Three circles, each of radius 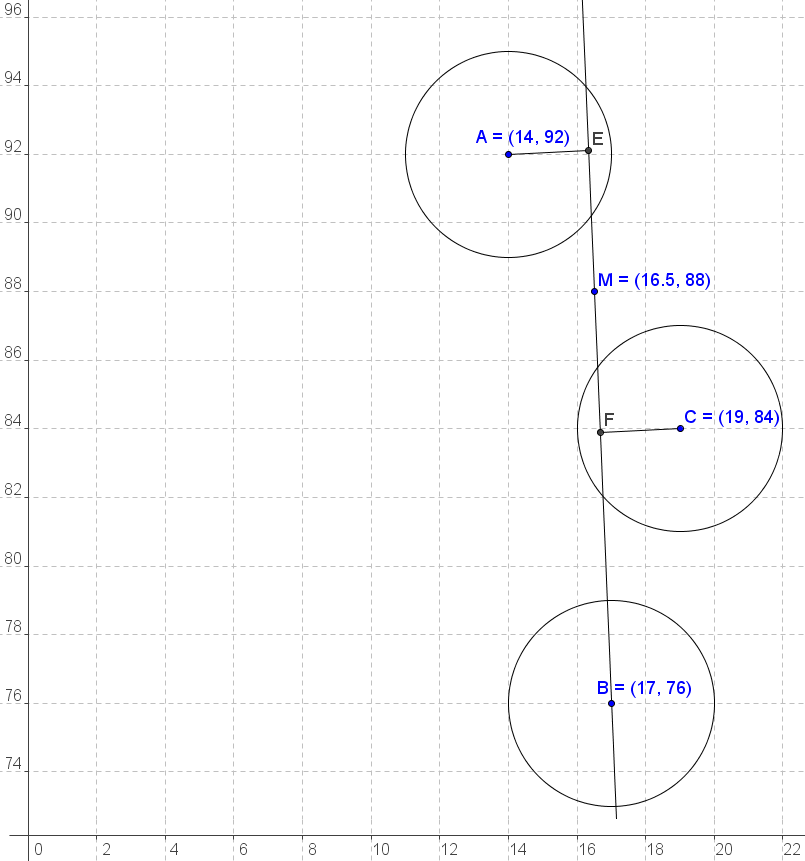 The line passes through the center of the second circle; hence it is the circle's diameter and splits the circle into two equal areas. For the rest of the problem, we do not have to worry about that circle.

Draw the midpoint of

(the centers of the other two circles), and call it

. If we draw the feet of the perpendiculars from

to the line (call

lies on the line. The coordinates of

Thus, the slope of the line is

Remark: Notice the fact that the radius is 3 is not used in this problem; in fact changing the radius does not affect the answer.

First of all, we can translate everything downwards by

and to the left by

. Then, note that a line passing through a given point intersecting a circle with a center as that given point will always cut the circle in half, so we can re-phrase the problem:

Two circles, each of radius

to the line is the same as the distance from

to the line. Let the line be

We can split this into two cases.

In this case, the absolute value of the slope of the line won’t be an integer, and since this is an AIME problem, we know it’s not possible.

But we also know that it passes through the point

. Plugging this in, we see that

Consider the region of the plane between

. The parts of the circles centered at

in this region have equal area. This is by symmetry- the lines defining the region are 2 units away from the centers of each circle and therefore cut off congruent segments. We will draw the line in a way that uses this symmetry and makes identical cuts on the circles. Since

units below the center of the lower circle, we will have the line exit the region

units above the center of the upper circle, at

. We then find that the slope of the line is

(Note: this solution does not feel rigorous when working through it, but it can be checked easily. In the above diagram, the point

is marked. Rotate the aforementioned region of the plane

, and the fact that certain areas are equal is evident.)

We can redefine the coordinate system so that the center of the center circle is the origin, for easier calculations, as the slope of the line and the congruence of the circles do not depend on it.

. A line bisects a circle iff it passes through the center. Therefore, we can ignore the bottom circle because it contributes an equal area with any line. A line passing through the centroid of any plane system with two perpendicular lines of reflectional symmetry bisects it. We have defined two points of the line, which are

. We use the slope formula to calculate the slope, which is

, leading to an answer of

Notice that any line that passes through the bottom circle's center cuts it in half, so all we really care about are the top two circles. Suppose

is the desired line. Draw lines

must be the "average" of

. So we have that