During AIME testing, the AoPS Wiki is in read-only mode. No edits can be made.
AoPS Wiki
Resources Aops Wiki 1985 AIME Problems/Problem 11

An ellipse is defined to be the locus of points

such that the sum of the distances between

and the two foci is constant. Let

be the point of tangency of the ellipse with the

must be the point on the axis such that the sum

be where the line through

intersects the ellipse. We will show that

-axis. Also, since the entire ellipse is on or above the

-axis and the line through

is perpendicular to the

-axis, we must have

But the right most sum is the straight-line distance from

and the left is the distance of some path from

., so this is only possible if we have equality and thus

). Finding the optimal location for

is a classic problem: for any path from

and then back to

, we can reflect (as above) the second leg of this path (from

-axis. Then our path connects

via some point on the 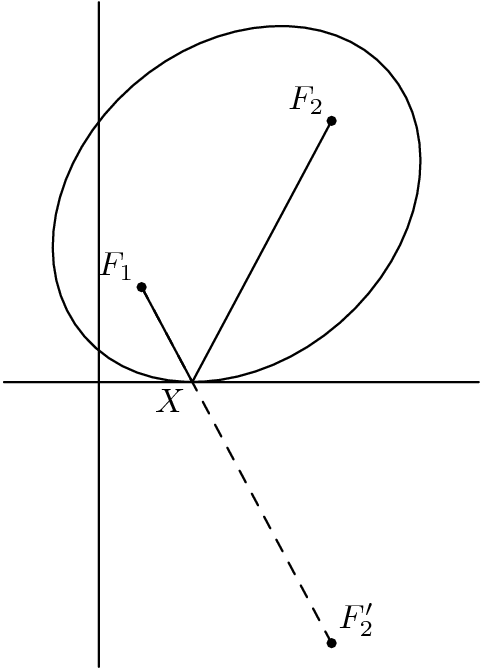 The sum of the two distances

is therefore equal to the length of the segment

, which by the distance formula is just

be the two endpoints of the major axis of the ellipse. Then by symmetry

is on the ellipse), so the answer is

An ellipse is defined as the set of points where the sum of the distances from the foci to the point is fixed. The length of major axis is equal to the sum of these distances

. Thus if we find the sum of the distances, we get the answer. Let k be this fixed sum; then we get, by the distance formula:

This is the equation of the ellipse expressed in terms of

. The line tangent to the ellipse at the given point

will thus have slope

. Taking the derivative gives us the slope of this line. To simplify, let

Next, we multiply by the conjugate to remove square roots. We next move the resulting

. Substituting back into our original distance formula, solving for