Every time these two wheels are spun, two numbers are selected by the pointers. What is the probability that the sum of the two selected numbers is even? 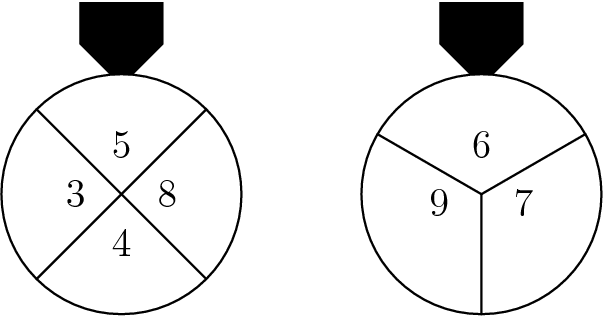 For the sum to be even, the two selected numbers must have the same parity.

The first spinner has

even, so no matter what the second spinner is, there is a

chance the first spinner lands on a number with the same parity, so the probability of an even sum is

For the sum to be even, the two selected numbers must have the same parity.

With this knowledge, we can break down the problem into smaller problems, first, the probability that the first spinner lands on an even number. There is a

chance that this happens, and a

chance that the second spinner lands on an even number as well, so a

. If the first spinner lands on an odd number, and the second on an odd, there is a

chance of this happening. Adding these two probabilities together, we get

We can complement count this, so we are looking for odd results. This happens when they have different parity. We can find the probability of an odd sum by using casework.

Case 1: The left spinner is odd. That has

, and the right has probability of

for an even number, of

Case 2: The left spinner is even. That has

, and the right has probability of

for an odd number, of