In Pascal's Triangle, each entry is the sum of the two entries above it. The first few rows of the triangle are shown below.

(The squares with two or more dotted edges have been removed from the original board in previous moves.) 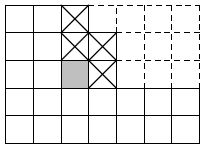