be a triangle and let

be its incircle. Denote by

the points on sides

the point of intersection of segments

at two points, the closer of which to the vertex

It is well known that the excircle opposite

. (Proof: let the points of tangency of the excircle with the lines

Now consider the homothety that carries the incircle of

are collinear), and carries the tangency points 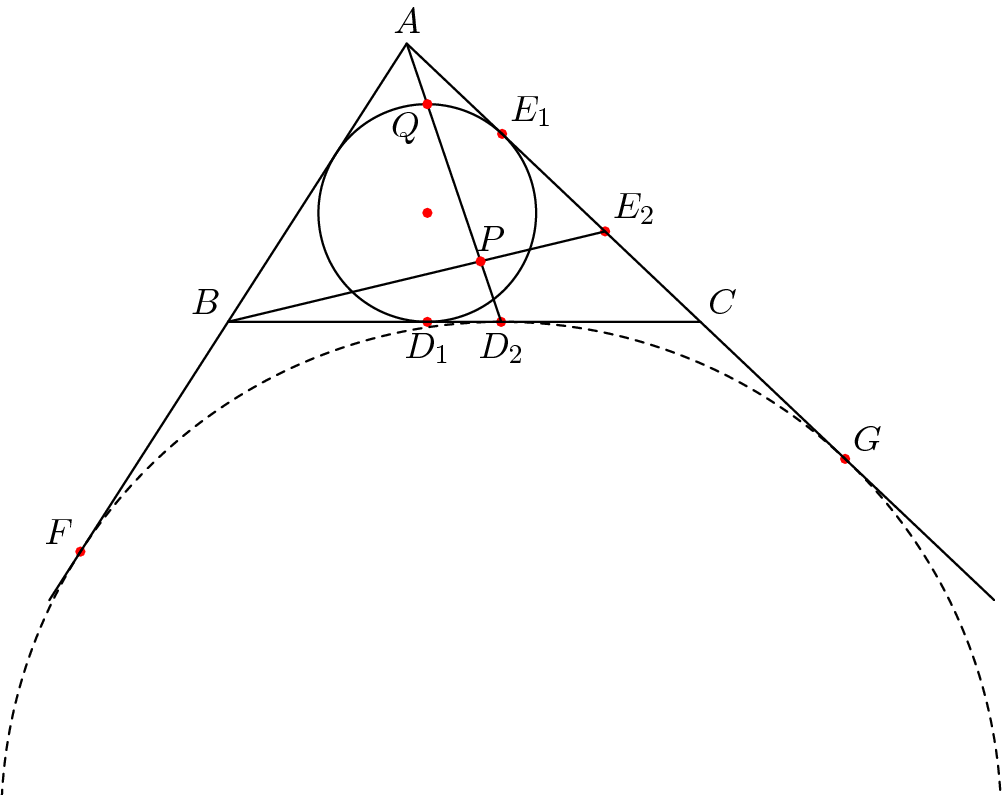 The key observation is the following lemma.

is the incenter of triangle

, which in turn implies that

be the line tangent to circle

is an excircle of triangle

denote the dilation with its center at

. It also follows that an excircle

is tangent to the side

It is well known that

denote the points of tangency of circle

, respectively. Then by equal tangents,

be the respective midpoints of segments

is also the midpoint of segment

is the midline of triangle

. Similarly, we can prove that

be the centroid of triangle

as the dilation with its center at

, respectively. It also follows that

Note: We used directed lengths in our calculations to avoid possible complications caused by the different shapes of triangle

Here is a rather nice solution using barycentric coordinates:

. Let the side lengths of the triangle be

Clearly then, the non-normalized coordinates of

Normalizing, we have that

Now, we find the point

inside the triangle on the line

. It is then sufficient to show that this point lies on the incircle.

of the way "up" the line segment from

. Thus, we are looking for the point that is

of the way "down" the line segment from

, it can easily be found that

Recalling that the equation of the incircle is

We must show that this equation is true for

Plugging in our values, this means showing that

Plugging in the value of

The first bracket is just

and the second bracket is

lies on the incircle and

, and our proof is complete.

We again use Barycentric coordinates. As before, let

. Then working component-vise, we get

from which we can easily get the coordinates of

It suffices to show that

be the incenter of triangle

Hence the claim has been proved.

and the midpoint of

is the point diametrically opposite to

, and hence it lies on

off the 2 points. Thus