be a point in the plane of triangle

such that the segments

are the sides of an obtuse triangle. Assume that in this triangle the obtuse angle opposes the side congruent to

and we wish to prove that

. It would be sufficient to prove that

which is true by the trivial inequality.

be the origin. For a point

. The given conditions may be written as

on both sides of the last inequality gives

Since the left-hand side of the last inequality is nonnegative, the right-hand side is positive. Hence

For the sake of contradiction, let's assume to the contrary that

. We claim that the quadrilateral

is convex. Now applying the generalized Ptolemy's Theorem to the convex quadrilateral

where the second inequality is by Cauchy-Schwarz. This implies

, in contradiction with the facts that

are the sides of an obtuse triangle and

We present two arguments to prove our claim.

First argument: Without loss of generality, we may assume that

are in counterclockwise order. Let lines

be the perpendicular bisectors of segments

cut the plane into four regions and

is in the interior of one of these regions. Since

must be in the interior of the region that opposes

is not acute, ray

must lie in the interiors of the regions adjacent to

are the four regions in counterclockwise order. Since

is entirely in the interior of 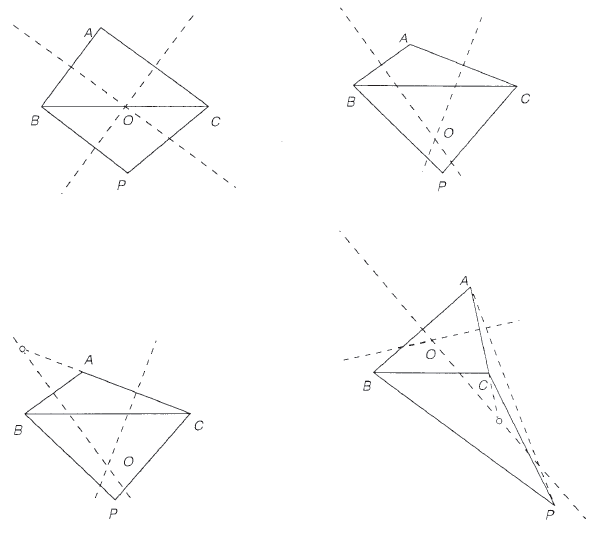 . Since this covers all four cases,

be the origin in vector space, and let

denote the position vectors of

respectively. Then the obtuse triangle condition,

using the fact that the square of a vector (the dot product of itself and itself) is the square of its magnitude. Now, notice that to prove

is acute, it suffices to show that

. But this follows from the observation that

and therefore our desired conclusion.

, respectively. For the points

Without loss of generality, assume that in a Cartesian coordinate system,

is at the point

is at the point

. Without loss of generality, also assume that

Now, assume for contradiction that

is not acute. Since

are the sides of an obtuse triangle, with

the longest side, it follows that

. This inequality simplifies to

are both perfect squares, all terms of this inequality except for

are already guaranteed to be nonnegative.

would be closer to

, this is not possible. Therefore,

not being acute implies that

are guaranteed to be nonnegative, this entire expression cannot be negative, leading to a contradiction. Therefore,